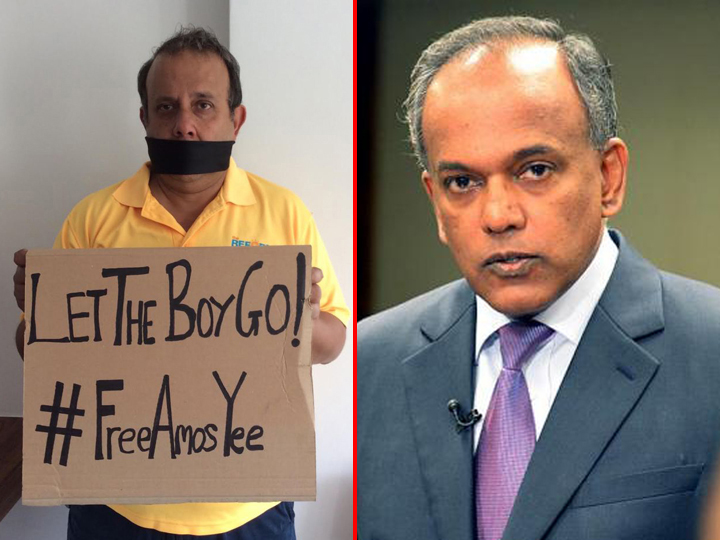 I refer to the shoddy, petulant and misleading press release dated 25 March 2017 issued by your ministry : “MHA’s Comments on Amos Yee’s Asylum Application.”

I recognise that this may have been written over the weekend when MHA was short-staffed but it falls far short of the standards we would expect from a First World Government. As someone who was one of the top lawyers in Singapore prior to becoming a Minister I’m surprised that you would want your name appended to it. What concerns me even more is that the statement contains falsehoods, near truths and misleading information that opens our government ministry up to accusations of deliberately lying.

In your press release you claim that the reason Amos received asylum is because he engaged in hate speech for which he was legitimately prosecuted and convicted in Singapore but that the USA has a higher tolerance for such hate speech. Therefore you suggest that a nation that embraces haters accepted a Singaporean hater. This is patently false.

As it must be presumed that most citizens will not go to the bother of reading the actual judgement to discover the real reason Yee was granted asylum I will reproduce some of the judgement here.

On the matter of Hate Speech

The phrase “hate speech” is misleading in the extreme. We have no hate speech laws per se in Singapore and in fact do not recognise hate speech. We have laws pertaining  to sedition and section 298 of the Indian penal Code 1860 “Uttering words, etc., with the deliberate intent to wound the religious or racial feelings of any person”. These laws are archaic, poorly defined for modern use and problematic in that their original purpose was for a colonial power to exert political control over its subjects. In addition they overlap and contradict article 14 of our Constitution which protects freedom of speech.

Whilst it is true that Yee was legitimately prosecuted in Singapore under these archaic and poorly worded laws and separately it is also probably true to say that America places higher protection on freedom of speech, it is a falsehood by your agency to say that the two are connected. There is no causal relationship between them in Judge Cole’s decision to grant Yee amnesty. The judge granted Yee asylum on the grounds of political persecution as a “young political dissident”

Yet your statement, in addition to the doubtful attempt to employ the Oxford comma, conflates the two:

8. Yee had engaged in hate speech against Christians and Muslims.

9. The US adopts a different standard, and allows some such hate speech under the rubric of freedom of speech.

Justice Cole does not deny that Yee was prosecuted. Instead he reads a different motive into that prosecution.

“So, though Yee’s prosecutions may have been legal under Singapore law, they clearly served a “nefarious purpose”, namely, to stifle political dissent…Thus Yee has demonstrated he suffered past persecution on account of his political opinion.”

On the Matter of Political Persecution

As I have demonstrated above Justice Cole gave Amos asylum not because of his anti-religious comments but on account of the political persecution he received which is a damning indictment of our government, our democracy and the judiciary.  Your statement fails to address these criticisms except to once again refer to hate speech and offenders being charged in point 11. Of your statement.

Justice Cole does indeed take in evidence on the speech that Amos used that was found to wound religious feelings. He deems it incidental to the attack on the reputation of Lee Kuan Yew put out in a blog by Yee at a time when the nation was still grieving and in shock. The Honourable Judge set out very cogently  the criteria for political asylum and the reasons why your prosecution of Amos came under these criteria:

First, the video “Lee Kuan Yew is Finally Dead” … was scathing not just in its criticism of Yew but of the Singapore regime in general…

‘Second, religion was only tangential to the video. The video is almost entirely about Yew and Singapore and its discussions of religion were only used to make a point about Yee’s dismal opinion of Yew. In fact religion took up only about 30 seconds of the videos 81/2 minute content.’

So, a thruthful reading of the judgement shows that far  from saying that the USA welcomes hate speakers Judge Cole makes it very clear Amos’s attack on Christians only took up thirty seconds of an 81/2 minute video, most of which was devoted to criticising Lee Kian Yew and the PAP Government.

On the matter of uneven application of the law.

Sixth, other people who made disparaging comments about religions but who were not similarly critical of the Singapore regime avoided prosecution. These include Calvin Cheng and Jason Neo…Both made comments critical of Islam equating muslims with terrorists

It is true in one important respect that Singapore has different standards for hate speech. There is one standard for critics of the Government such as Amos Yee and also for Tang Liang Hong, who stood with my father in Cheng San GRC in 1997, and Ho Juan Tai, a Workers Party candidate in 1976 who was forced to seek asylum in the UK when your Government threatened to charge him with stirring up chauvinism and ill feeling among the Chinese-educated.

There is another for the late Mr Lee Kuan Yew whose racist and anti-Muslim remarks are so numerous as not to need repeating here. There is also another standard for your client and former fellow MP Choo Wee Khiang who famously claimed in Parliament that when he drove through Little India at 3pm it was already dark because there were too many Indians around. Other individuals who seem exempt from Singapore’s professed zero tolerance for hate speech include Jason Neo, a former YPAP leader, and Calvin Cheng, the former NMP, both of whom, as well as Lee Kuan Yew, Justice Cole references in his judgement. Again i quote:

Sixth, other people who made disparaging comments about religions but who were not similarly critical of the Singapore regime avoided prosecution. These include Calvin Cheng and Jason Neo…Both made comments critical of Islam equating muslims with terrorists

You have not made any attempt to rebut Justice Cole’s damning conclusion that Amos’s prosecution had nothing to do with wounding religious feelings but was part of a well-recognised  and habitual pattern of stifling or crushing dissent. Instead you have engaged in a disinformation and fake news exercise designed to pull the wool over Singaporeans’ and foreigners’ eyes and convince them that Amos was granted asylum because the US had different standards with regard to hate speech. Ironically the very nature of the MHA statement serves only to reinforce Justice Cole’s ruling on the political nature of the persecution and prosecution of Amos Yee.

On the matter of legal counsel

Your ministry’s press release moves from misleading to outrageusly misleading when you say that Amos was represented by counsel in both the 2015 and 2016 proceedings.

This statement lacks the word “adequate” in front of counsel and the phrase “for the entirety of in front of  2015 and 2016.’ Which would turn it into an outright lie.

The facts are that Yee had trouble finding counsel at first, an immediate impediment to a fair and impartial hearing. Initially counsel only came forward In 2015 on the condition that he plead guilty.

Yee had trouble finding counsel for the second set of proceedings in 2016 and had no counsel at all  in the earlier stages. He was clearly denied a fair and impartial  trial.  In having no choice but to represent himself, as a 17 yr old unschooled in law and without the benefit of even a high school education, he made several wrong turns in navigating the legal procedural labyrinth and at one point wanted to cut a deal but had missed the opportunity.

In fact at the  time I had called for the judge to declare Yee unable to defend himself due to being a minor and not allow the hearings to proceed. When it became apparent that Amos was about to plead himself into consecutive sentences by hearing each case separately with the possibility of  triple jail time, an outcome he certainly had not considered, he did concede to a lawyer’s conditions and engage counsel.

Furthermore Amos Yee was arrested and interrogated over a period of days without access to a lawyer and without being able to have a parent or a responsible adult present as is the minimum standard expected of a country which is a signatory to the UN Convention on the Rights of the Child. Amos at that time was only 16.

Further, Amos Yee’s family incurred financial hardship in engaging lawyers. In most First World countries the state would have provided Amos with a lawyer if he was unable to afford one, from the moment he was first arrested. Instead he was forced to find a lawyer from a very small pool as most were reluctant to take on his case because of the political ramifications. By not having court appointed lawyers except in capital punishment cases Singapore is in fact saying that fair trials are the prerogative of the wealthy. It is these flaws in our legal system that led to Grossman Law referring to this case as “underscores the  vital need for an independent  judiciary in a functioning democracy.”

These failures in our justice system allowed Justice Cole  to truthfully state:

The harm Yee suffered rises to the level of persecution…An asylum applicant’ s age may be taken into account when evaluating the severity of an incident and whether it qualifies as persecution, “for the harm a child fears or has suffered…may be relatively less than that of an adult and still amount to persecution…

Yee’s treatment at the hands of the Singapore government rises to the level of persecution.

In conclusion, Minister, would you not agree that the persecution of Amos Yee amounts to a familiar pattern of using prosecutions or civil suits to crush dissent? Whether you agree or not you must refrain from using your position of authority to mislead us as to the real reason why the US gave Amos asylum just as in future the PAP Government should refrain from using the law and the courts as tools of political coercion and control.