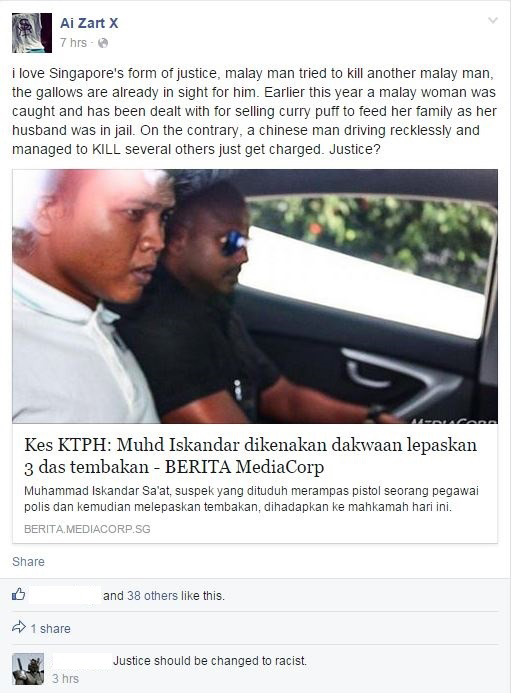 GERALD: This is called trying to stir racist sentiments.

I wanted to highlight these comments which I came across because it’s unfair to accuse the courts in Singapore of playing the racist card, taking into account both incidents.

In the case of the Khoo Teck Puat hospital shooting, if the intention of the subject was to harm the policeman by means of firearms, then it’s the death penalty according to law.

Regarding the traffic accident, there’s no intention to cause the death of any persons (which is why it’s called an accident). Also, there’s no death sentence punishment under the Road Safety Act.

Both are crimes which involved killings, but the circumstances of each are different and so are the punishments specified in the law.

I was hoping that the comments were some sort of satire, but I can’t see the irony or wit in them.

I hope that comments like these which fan the flames of racism will not turn Chinese and Malays in Singapore against each other because of some wrongly perceived slight.

Thanks Gerald for this letter.
Send us your letters at mail@redwiretimes.com
Find us on Facebook! https://www.facebook.com/redwire.singapore