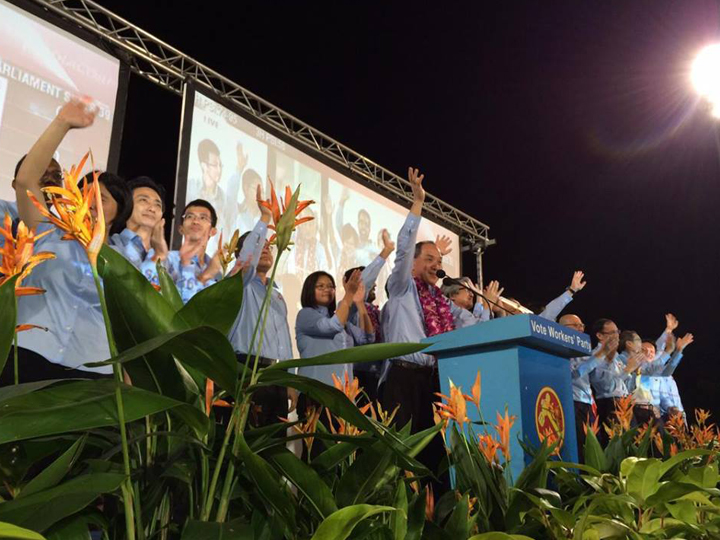 Slightly over 2000 votes saved the Workers’ Party from an embarrassing defeat in Aljunied GRC, where it had consolidated its A-Team of Secretary-General Low Thia Khiang and Chairman Sylvia Lim, together with Chen Show Mao, Faisal Manap and Pritam Singh.

It edged out the PAP’s “suicide squad” of Victor Lye and co, winning 50.95 percent of the vote.

But the WP will be worried even with a win, considering they marched into Aljunied with 54.72 percent of the vote in General Election 2011.

That too, with Foreign Minister George Yeo at the helm, compared to a bunch of relative unknowns this time round.

“You have given us your mandate to represent you. We will do our best to live up to the trust you have placed in us. For those of you who have not voted for us, we respect your vote. We pledge to work with everyone and hope to earn your support in the coming term.”

The WP also lost in Punggol East SMC, which it was looking to retain under incumbent Lee Li Lian.

It managed though, to retain Hougang SMC, with Png Eng Huat securing 57.69 percent of the vote.

“It’s important to build trust between people and national institutions such as the civil service, the judiaciary and the media. Using these institutions to gain political advantage is against national interests.”

What’s worrying also for the WP is that as Singapore’s leading opposition, it managed its strongest win in Hougang, whereas the PAP won nearly 70 percent of the popular vote across Singapore.