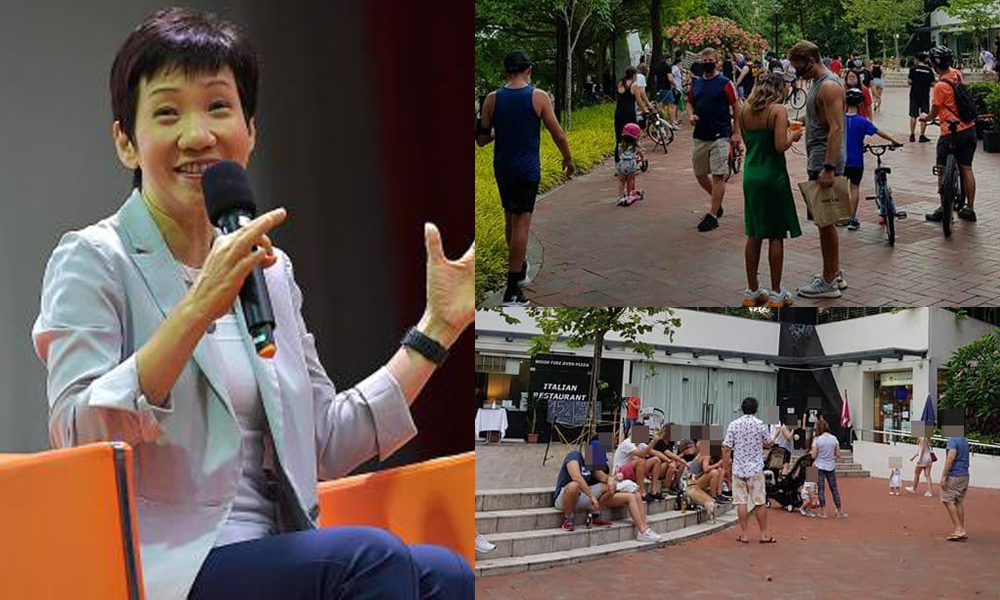 The government has once again raised its blame game against Singaporeans.

This time with Minister for Culture, Community and Youth Grace Fu blaming Singaporeans for being angry at ang mohs who flouted Circuit Breaker rules(stay-home-la-C***B** lockdown period rules) by making merry along Boat Quay.

Commenting on the incident at an online Regardless Of Race dialogue session, Fu said:

“When that video came out friends told me that yes, (there were also) expatriates in Singapore Botanic Gardens (gathering) and so on. It is not just restricted to one place, but somehow when we see a group of people that look different from us, there is a visceral reaction.”

“In the worst of times, it is easy to blame someone who is different from ourselves, when it is due to race, religion or nationality. What we must realise is that viruses do not discriminate, people do.”

The furore was heightened by eyewitnesses claim that the police and safe-distancing ambassadors walked passed these gatherings without taking action against the law-breakers.

In contrast, hundreds of persons across heartland estates were issued fines for flouting CB rules.

This, following Environment Minister Masagos Zulfikli’s stiff stance against the breaking of the rules – all who broke the rules would be issued a $300 fine on the spot.

As it stands, there are at least 3 new Covid-19 clusters in the vicinity of the Robertson Quay area.

“If these are acts of defiance and irresponsibility, they clearly undermine the efforts that everyone else has been making. What will it take to get them to understand that they are putting everyone’s safety at stake?”

To date, 7 persons who were part of the Robertson fracas have been not charged for not observing safe distancing protocols.