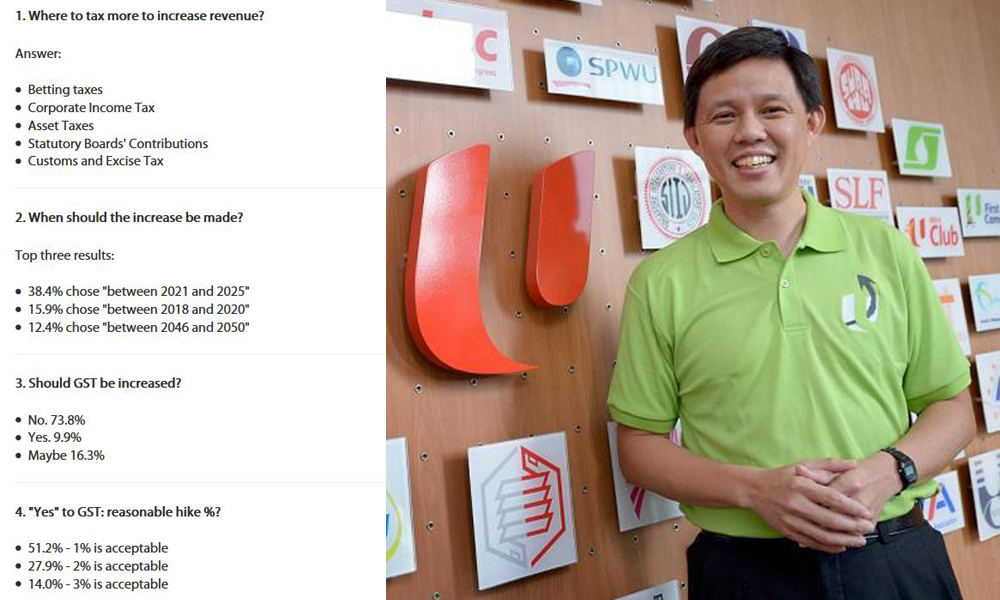 A survey alleged given to staff from the National Trade Union Congress (NTUC) suggest that “test balloons” were launched before the announcement of the GST hike in Budget 2018.

Local news agency The Online Citizen reported that a NTUC whistleblower had leaked a “short survey on tax matter with more than 300 of its union leaders” in Nov 2017, which included questions on the GST hike.

NTUC allegedly collected close to 440 responses from the survey, and survey results were released in the first week of Dec last year.

(READ: NTUC Confirms that Feedback on GST Hike was Gathered from Union Leaders before Budget 2018)

It’s uncertain who commissioned the survey.

The questions on GST in the survey are as follows, according to TOC:

1. Where to tax more to increase revenue?

2. When should the increase be made?

3. Should GST be increased?

5. How can govt help low-income earners if GST is increased?

6. “No” to GST: how else to balance spending and revenue?

Over the week, the PAP-led government has taken Workers’ Party chairman and MP Sylvia Lim to task for raising her “suspicion” that the government had floated “test balloons” and decided on raising GST to 9 percent from 2021 rather than immediately due to public backlash.

Ministers and MPs fervently pressed Lim to apologise for raising a “suspicion”, saying it cast aspersions on the integrity of the government.

To date, the government has faced widespread public condemnation for adopting “bullying tactics” in its pack attack on Lim.

Many have questioned whether it’s necessary to waste parliament’s time in the attempt to force an apology from Lim, when a simple clarification would have sufficed.

Lim has refused to apologise, saying she was voicing the concerns of her constituents as an MP ought to do.