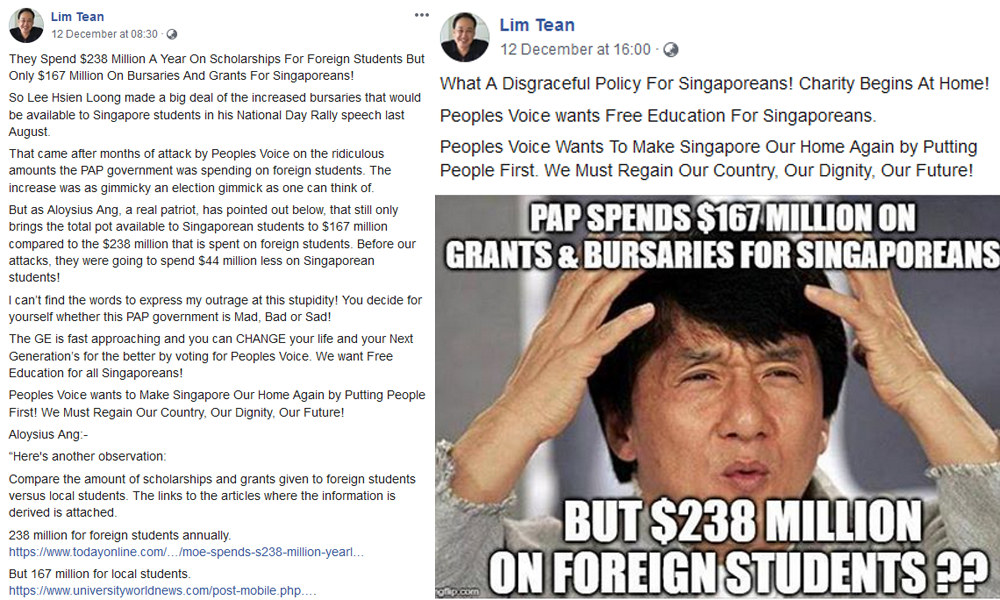 People’s Voice Party leader Lim Tean said today that he is considering legal options to challenge a Correction Notice issued by the government under the Protection from Online Falsehoods and Manipulation Act (POFMA).

The Correction Notices involved Facebook posts by Mr Lim on Thursday (12 Dec), which stated that
“the total pot available to Singaporean students [is] $167 million compared to the $238 million that is spent on foreign students”.

Responding to the posts, the government stated that Mr Lim was implying that “MOE spends less on Singaporean students than on foreign students” and that his statement is false and misleading.

The government said that MOE’s annual budget is S$13B, and almost all of this is spent on Singapore citizens.

It added that the S$238 million attributed to foreign students is 2 percent of the budget.

“The S$167M cited by Mr Lim refers only to bursaries for Singaporean tertiary students, and grossly understates MOE’s total spending on Singaporean citizens for education”.

Mr Lim has challenged the government’s statement, and has yet to put up a Correction Notice on his Facebook posts.

“This is a pathetic demand by a government that is obviously nervous about public reaction to the established fact that it spends $238 million on grants and scholarships on foreign students compared to $167 million on grants and bursaries on local students every year. And I am being generous when I use the figure of $167 million because it was $44 million less until Lee Hsien Loong announced the $44 million increase in his National Day Rally speech in August this year.

And Singaporeans should have no illusion that this is a government that was spending close to $500 million on grants and scholarships for foreign students before that figure was halved to $238 million compared to $123 million on Singaporean students.”

Calling POFMA a “crybaby” legislation”, he said that the law is being used by the government to “silence its opponents and chill public discussion of unpopular government policies”.