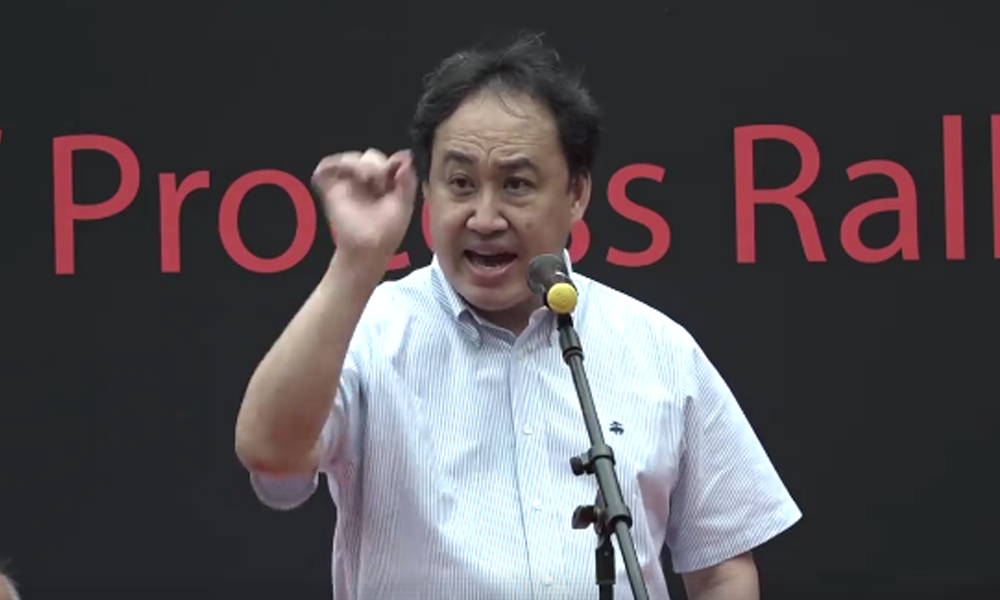 Speaking at the Abuse of Process Rally yesterday (26 Jan), Lim said that the concept of meritocracy in Singapore has led to unfairness and inequality.

Lim said that Singapore does not have a “real meritocracy”, and this has led to the nation becoming the “world’s second-most unequal society, according to the United Nations”.

Commenting on the “elite” in Singapore, he said:

“In Singapore, it means they have risen to the top because of their grades, and they wear their grades as a badge of honour. And then, when they turn into that group, they protect that group. After a while they become a different class. They call themselves ‘natural aristocrats’, and the rest of us are the ‘mediocres’.”

Lim raised the example of SMRT’s global search for a CEO last year that saw Desmond Kuek, who oversaw arguably the worst-ever stretch of performances in history, replaced with another former army general from a similar mould.

“You can’t conduct a global hunt for talent, have an SAF general run the MRT, after 5 failed years, have another SAF general replace him. There are many better MRT systems in the world – Taiwan, Hong Kong, Japan. Why are we not hiring those people?”

Lim also took a swipe at what he claims is the unequal nature of meritocracy that is practised in Singapore, saying that “if you want to have real meritocracy, you make sure there is equality in outcome.

“You make sure that when someone does not perform his job, he is sacked. And wasn’t that what Lee Kuan Yew told his own party and told the nation many years ago? That if something does not work the top person is removed?”

He raised the issues of the SingHealth data breach, the worst-ever cyber-attack to hit Singapore, and the flutter of deaths of national servicemen in the course of duty, and questioned why no action has been taken against the top brass of the relevant agencies.

“So, let us not talk about meritocracy under these circumstances, because it is not real meritocracy.”

Lim commented that the CPF retirement savings scheme is a “great abuse of process”.

“What they are doing to CPF now is virtually a confiscation of your money. It is money that – unless you change the government – you will never see in your lifetime.”

He said that the scheme, which currently requires Singaporeans and PRs to contribute 37 percent of their monthly disposable income to a personal retirement fund, has been managed inadqeautely.

“How can you have a system where people in their retirement years cannot afford to retire? 70, 80-year-olds are still having to work. You tell me that is a good system, I tell you that is a bad system.”

Lim urged the Singaporean public to make sure there are checks in parliament so that the government cannot “shift the goalposts”.

“You even have one NMP who tells you CPF is not your money. Can you believe that?”