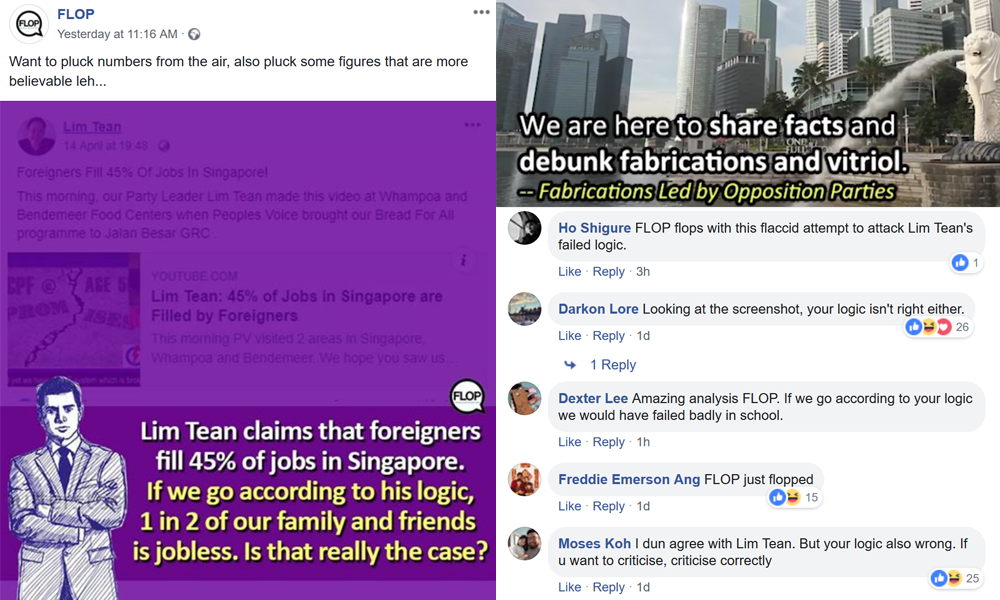 Fabrications Led by Opposition Parties (FLOP), which has been accused of being part of the PAP’s rumoured “internet brigade”, has been flamed for spreading fake news in an attempt to discredit opposition bloc politician Lim Tean.

In a Facebook post on Wednesday (17 Apr), FLOP posted that graphic you see above, painting the Peoples’ Voice Party chief as a trouble-maker and a liar for his statement on jobs distribution in Singapore.

“Lim Tean claims that foreigners fill 45% of jobs in Singapore. If we go according to his logic, 1 in 2 of our family and friends is jobless. Is that really the case?”

Astute and educated netizens were quick to point out the logical flaw in FLOP’s statement, with some questioning whether the page was deliberately twisting facts to attack Lim.

And therein lies the logical flaw by FLOP, or perhaps a deliberate twisting of facts – the number of jobs available in the economy is not equivalent to the number of people living in Singapore.

And not everyone is an active job-seeker, accounting for retirees and students.

In other words, even if there are 5 million people living in Singapore, the number of jobs available may not amount to 5 million.

Interestingly enough, FLOP touts itself as a page that exist to “share facts and debunk fabrications and vitriol”.

Supposed PAP “internet brigade” platforms have been caught publishing fake news on many occasions over the years, and are no stranger to smear campaigns.

Fabrications About the PAP has previously attempted to paint Li Shengwu, the Harvard economist who is being sued by his uncle Prime Minister Lee Hsien Loong over a private Facebook post, as an “enemy of the state” who is out to attack Singaporeans at large.

The FAP Facebook page has also been exposed for spreading lies about the Workers’ Party.