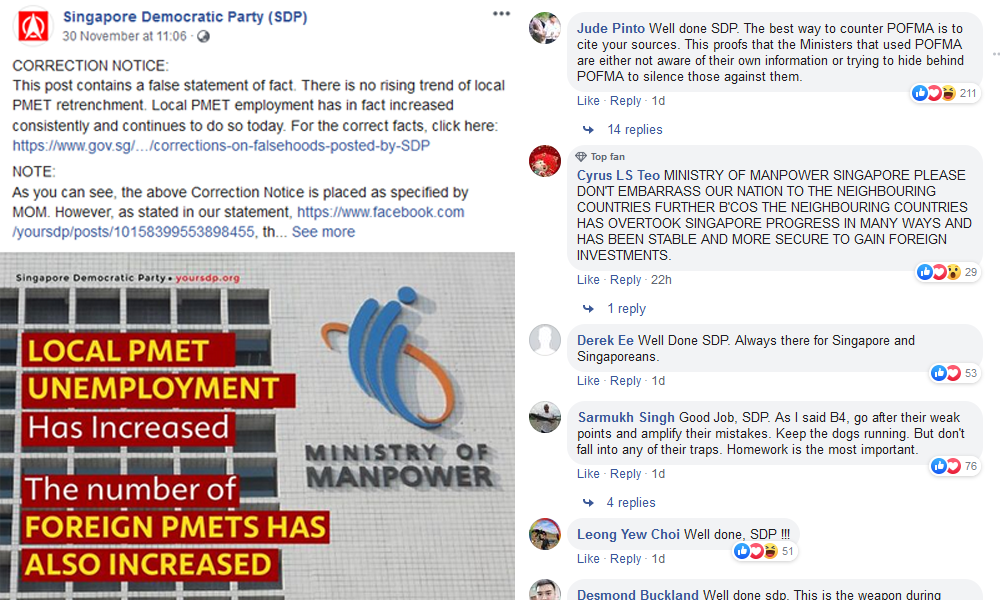 The Singapore Democrats have hit back against a Correction Notice ordered by the government with its own additional correction note, to much cheer from the public.

It’s original article about local PMET unemployment which was deemed by the government to be “fake news”, and its subsequent rebuttal have been shared more widely on Facebook, with hundreds of netizens voicing their support for the party.

In its original article, the SDP claimed that since 2015 the unemployment rate for local PMETs is rising, more local PMETs are being retrenched, and that during this time foreign PMET employment rates have been rising.

Ordering a Correction Notice, the government stated that there has been no rising trend of local PMET retrenchments, and that local PMET employment has, on the contrary, increased.

Regarding foreign PMET employment, the government said that “the number of Employment Pass (EP) holders has historically fluctuated depending on economic conditions”.

However, the SDP has hit back, stating that its figures were taken from The Straits Times, a local newspaper which is widely regarded as a government mouthpiece.

The party added that The Straits Times had quoted the Ministry of Manpower as its source.

“The said newspaper is a government-controlled newspaper, we have no reason to believe that it would publish fake news about the government. As such, the MOM should take the matter up with the ST.”

Other newspapers such as ST and TODAY also published similar reports.

The SDP has put up its own correction note to the Correction Notice, stating that “the conclusions that Manpower Minister Josephine Teo arrived at are disputable. Under POFMA, we have to comply with the order but we will be applying to cancel the Correction Directions”.