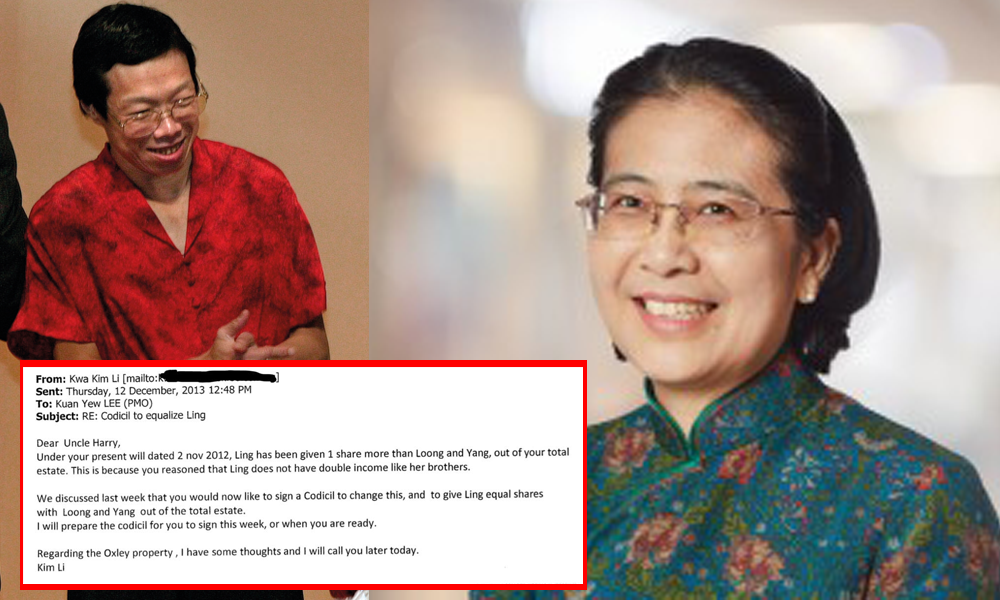 Dr Lee Wei Ling has leaked an email exchange purportedly between her father, the late Lee Kuan Yew, and his lawyer Kwa Kim Lee from Dec 2013.

In a Facebook post, Dr Lee claimed that Kwa lied when she said that she did not prepare Lee Kuan Yew’s last will.

She added she has more to substantiate her claim.

“My dishonourable brother Loong has repeatedly alleged that my sister-in-law, Yang’s wife, prepared and somehow got our father to sign a will in December 2013. Kwa Kim Li (KKL) of Lee & Lee has denied involvement in the events that led to this 2013 will. These are all falsehoods. KKL has been lying. She has also breached her duties to her client, my father.

Lee & Lee have always been lawyers for my father’s personal matters including all his wills, powers of attorney, and Advance Medical Directives including his affirmation in August 2014 of his AMD.

Ms Kwa, who prepared the previous six versions of the will of the late Lee Kuan Yew, has denied preparing Lee Kuan Yew’s last will.

However, in the email leaked by Dr Lee, Kwa appears to have a part in the preparation of the will.

“We discussed last week that you would now like to sign a Codicil to change this, and to give Ling equal shares with Loong an Yang out of the total estate. I will prepare the codicil for you to sign this week, or when you are ready.”

A codicil is a legal addition or amendment to a part of a will.

In the tussle over the 38 Oxley Road house, Prime Minister Lee Hsieng Loong raised the question of whether there was a conflict of interest when Lee Suet Fern helped prepare the final will since her husband stood to gain from the removal of his sister Lee Wei Ling’s extra share of the estate in the will.

Following a complaint from the Attorney-General’s Chambers, now headed by PM Lee’s former personal lawyer Lucien Wong, the Law Society opened a disciplinary enquiry into Lee Suet Fern’s role in the preparation of LKY’s last will.

However, Lee Hsien Yang and Dr Lee have maintained that Lee Suet Fern did not draft the last will.

Lee Hsien Yang claims that she facilitated the witnessing and signing of the last will.

“Paragraph 7 (the demolition clause) of the Will was drafted at LKY’s direction, and put into language by Lee Suet Fern his daughter-in-law and when he was satisfied he asked Kim Li to insert it into his will.”