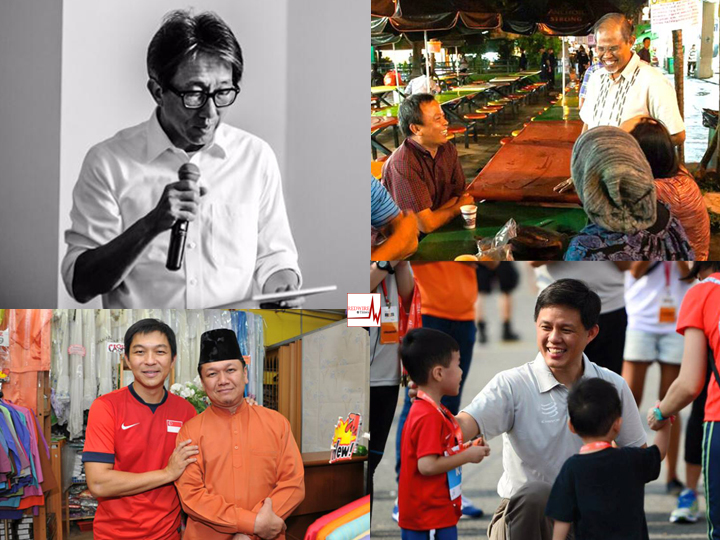 Prime Minister Lee Hsien Loong has announced changes to his cabinet, as part of the process of “continuing leadership renewal”, and building a “strong ‘A’ team” for Singapore.

Mr Masagos Zulkifli, 51, will be promoted to full Minister with effect from Thursday. He will be appointed Minister in the Prime Minister’s Office and will continue in the Ministry of Home Affairs and Ministry of Foreign Affairs as Second Minister in both ministries.

Mr Chan Chun Sing, 46, will be appointed Minister in the Prime Minister’s Office. He will relinquish his appointments as Minister for Social and Family Development and Second Minister for Defence with effect from Thursday, Apr 9.

Mr Lim Swee Say, 60, will be appointed Minister for Manpower and will relinquish his appointment as Minister in the Prime Minister’s Office on May 4.

Mr Lui Tuck Yew, 53, will be appointed Second Minister for Defence with effect from Thursday. He will continue as Minister for Transport.

I am promoting Masagos Zulkifli to full Minister. He has performed well, both in his ministries and as an MP in Tampines. It is the first time we are having two Malay full ministers, which reflects the progress of the Malay community.

Other changes are because Chan Chun Sing is taking over as Secretary-General of NTUC from Lim Swee Say. So Swee Say goes to Manpower, and Tan Chuan-Jin goes to Social and Family Development. (Chun Sing also gives up his post of Second Minister in MINDEF, which Lui Tuck Yew will take over.)

Swee Say has done a lot in NTUC: helping workers to upgrade themselves, finding them new jobs when they are retrenched, assuring them that they do not face globalisation and international competition alone. Chun Sing will have much work to do building on what Swee Say has done, but I am confident that he is up to the task.

These changes are part of continuing leadership renewal, to build a strong ‘A’ team for Singapore.” 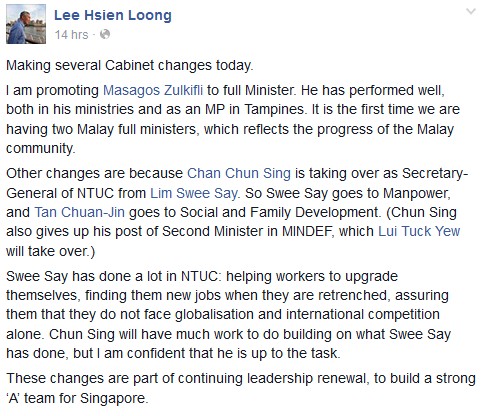