The founder of the voluntary welfare organisation for workers shared this on the Transitioning website.

1. Authoritative – its obvious that senior Lee carries more weight and authority than the son when he was Prime Minister. 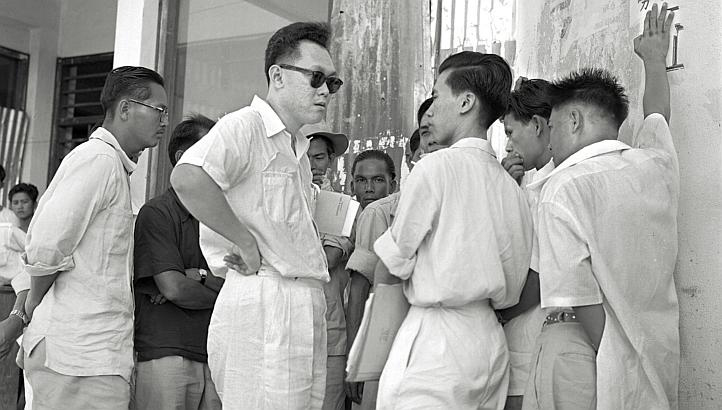 His word is power and no one seems to be able to over-write him when a decision is made.

In a supposedly democratic-status society, a one-man-show government looks increasingly totalitarian in practice.

Junior Lee tries to include in the cabinet as his inner circle but its obvious that his paper generals are clueless as to how to resolve certain social issues as they lack the ground-up experience and practical know-how.

2. Oratorical skills – people stayed home and watched the national day speeches of senior Lee as he memerises us with his acute oratorical skills peppered with alot of metaphors.

Juinor Lee tries to use too much facts and figures in his speeches and sometimes the audience got lost in what he is trying to address.

There are also too many occasions of empty promises and over time people distrust what he says unlike senior Lee who tries to implement what he promises throughout his term as PM..

3. Ruthlessness – its obvious that senior Lee is more ruthless than his son in eradicating the opposition camp. 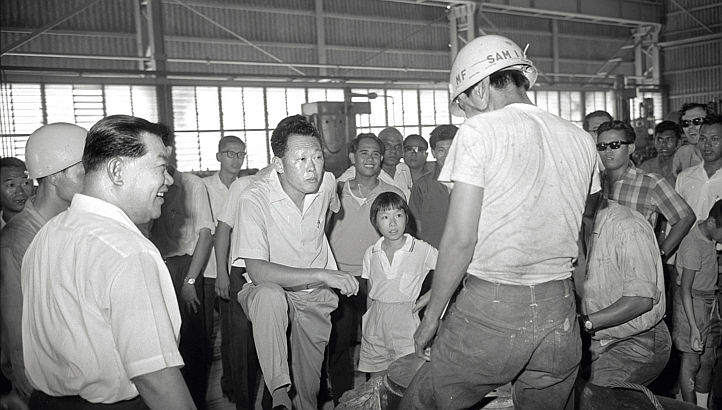 He imprisons dissidents, forced them to flee abroad and sued his opponents till they ran aground all in the name of protecting Singapore.

It is this ruthlessness streak in him that deters many from embracing him as one of the world’s great statesman of the century in the light of Margaret Thatcher.

People will always see this bad side of him rather than simply focusing on his third-world-to-first-world accolade..

Junior Lee only recently started to use lawsuits to clamp down on dissent and hopefully it will not be a common feature in future as it will ruin his good-nature persona so far.

4. Inner circle – senior Lee is blessed with a strong inner circle in the likes of Goh Kweng Swee, S Rajaratnam, EW Bakar and Toh Chin Chye There were many others who helped senior Lee after the break-away from Malaysia to rebuild Singapore.

Most of them were not as well paid as the current ministers but proved to be more effective in governing the country.

Junior Lee is not as blessed as his father as his current inner circle seems weak – his general ministers will not make it into any of senior Lee’s team and their appointment to high-powered positions looks questionsable.

As the PM will depend alot on his inner team to solve some of the more serious problems face by the country, their effectiveness or lack of will affect his own personal standing with the people.

He needs more people from the private sector with hands-on experience to run the ship and as of now we can only see that he is relying alot on military generals to do the job.

its obvious that they are not up to the mark yet.

5. Decisiveness – a true leader is decisive and will make a decision even though its a wrong one as a bad decision is better than not making one at all. 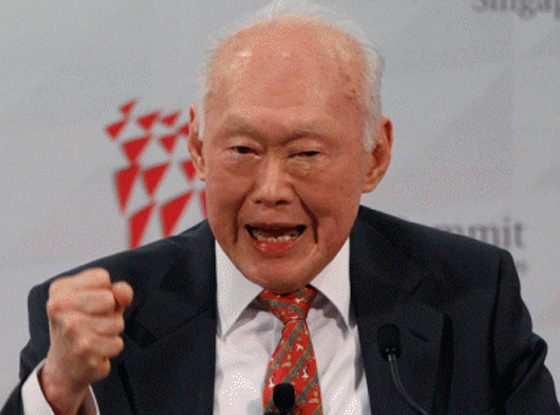 Junior Lee is deemed as a soft leader and seldom want to make hard decision unless pushed to make one.

He was cruising along in his first five years as PM and is largely invisible as he relied on his team of ministers to hold the fort for him.

We seldom heard from him and some ministers even outshone him in the process.

However, in his second term – after losing Aljunied GRC and registering the lowest majority votes ever garnered in any election, we started to see him more and realised that his leadership style is rather similar with his father.

He would criticise netizens for reacting to the Filipino independence day celebration by calling them thugs and made unsavoury comments such as saying locals committed more crimes than foreigners when the crime rate shot up.

Senior Lee on the other hand is brutally decisive and once banned chewing gum when he saw a report that train cabin doors couldn’t close properly because commuters sticked gum on the doors causing it to malfunction.

6. Confidence – senior Lee oozes confidence whenever he speaks unlike his son who is seen as trying too hard to convince.

Both are seen as rather articulate in delivering public speeches but its senior Lee who displayed ultra confidence when he is facing the public.

Being the former PM’s son also invaribaly works against him and people tend to compare the two which is unfortunate as both have different strengths and weaknesses.

Many people also tend to discount junior Lee as someone who climbs the ladder through his father’s influence.

This is most unfortunate and works greatly against junior Lee as psychologically he will want to prove himself with greater effort sometimes to his own detriment.

7. Foreign relationship – senior Lee made at least a trip to the US a year shoring up precious international exposure unlike his son who only visited the US once during President Obama’s tenure as President. 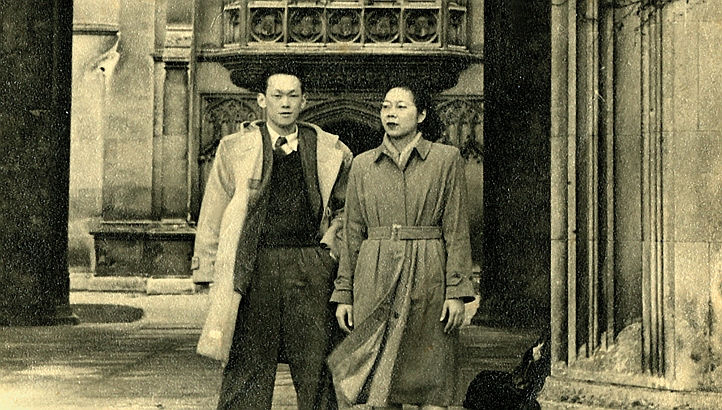 Compared to his father, junior Lee does not seem to enjoy the international arena and prefer a domestic role during his 10-year tenure as PM.

Senior Lee enjoys much international prestige as a sought-after advisor for his expert views on China and to the western world, he is the only trusted Asian voice then.

8. Family matter – like senior Lee, his son also enjoys the professional relationship with his wife as Ho Ching manages Temasek Holdings much to the displeasure of many of the old guards citing nepotism as their main gripe.

Senior Lee wife only handles the law firm Lee & Lee and is seldom seen interfering into the affairs of the former PM though many people rumoured that she is the one that turned the head.

The prematured death of his former wife also provided a soft spot for junior Lee though his current wife is hugely unpopular due to her close association with the global soveriegn fund.

She is also seen as perpetuating the myth that the famiLee is taking care of one another’s business and back which is the current grouse of the Lee empire.

9. Popularity – its obvious that senior Lee is far more popular than his son even though he is a ruthless and a tyrant leader.

Many senior citizens proclaimed him as a hero who brought them out of a fishing port into international limelight.

Junior Lee is seen as riding on the back of his father and so far has nothing much to show except a vibrant economy which only benefits the rich 5%.

The middle class evaporates over the years while he rules as PM and there is more class division than ever due to a serious wage disparity between the have’s and the have’s not.

His liberal foreign-worker policy allows in more than a million and a half foreigners – many unskilled and unwelcomed as they cause all sorts of congestion and employment problems in our small country.

10. Legacy – its also obvious that senior Lee will leave behind a bigger legacy than his son. 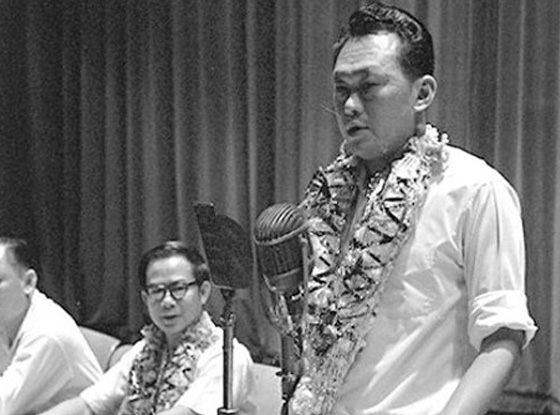 His miraculous story of transformation from third world to first world country will always appeal to people all the world round.

Its something that people will show awe when they hear of such a story – something which will always fascinate the human spirit.

To be fair to junior Lee, its an achievement which can never be replicated as its a different era with different aspiration.

He also took on a job which is made difficult by a more boisterious civil voice yearning for more freedom of speech and human rights.

History will show if junior Lee is a failure when the result of the forthcoming election comes in – will he loses more seats or reclaim back Aljunied GRC?

The next pertinent question to ask is – Is it fair then to judge his tenure as PM through the number of seats he loses in general election?