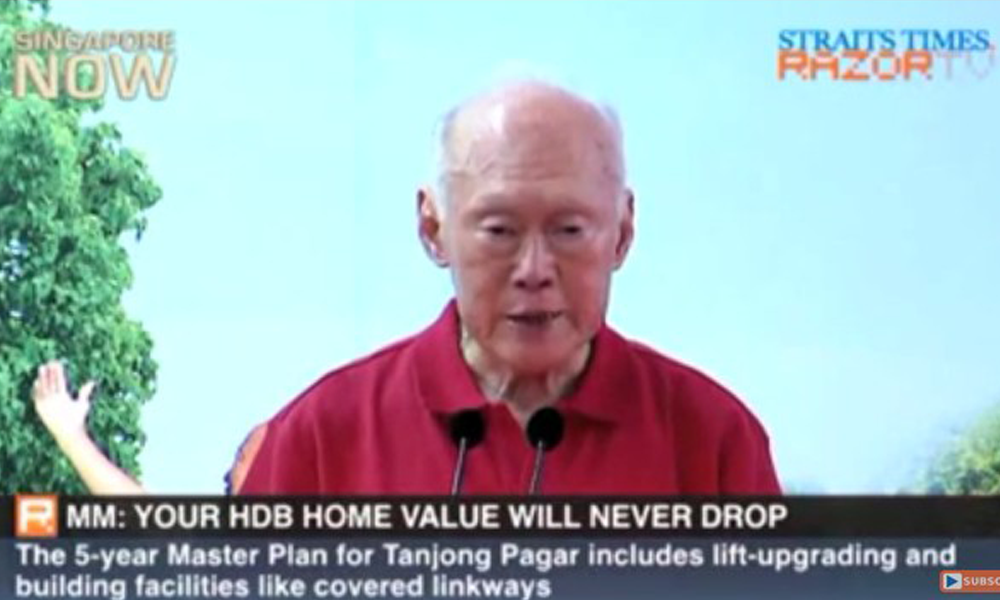 This was the introduction to a state media news report back in 2013, when the late Lee Kuan Yew ensured at the launch of Tanjong Pagar’s 5-year master plan that the value of public housing will never fall:

“As most Singaporeans live in HDB flats, Minister Mentor Lee Kuan Yew’s aim is to make home ownership the most valuable possession for Singaporeans. The MP for Tanjong Pagar also that home renewal and upgrading programmes in Singapore ensure that the value of housing here will never drop.”

The, the late Lee said:

“We intend to keep the value of these homes up, it will never go down. Because it will be renewed, the surroundings will improve, and as Singapore prospers, GDP goes up, the value of homes will go up.”

The late Lee was talking about how upgrading to aging housing estates under the Home Improvement Programme would ensure they keep their value.

He said, in no uncertain terms (and we’ll repeat for the sake of those who missed it’s the first time):

“We intend to keep the value of these homes up, it will never go down.”

However, the government today has twisted and turn to try and wrangle its way out of the “what expires must eventually be worthless” hole that it has dug for itself.

More specifically, the fact at this time that HDB flats will become worthless by the end of their 99 year lease and will be reacquired by the government.

Only flats chosen for the Selective En-Bloc Redevelopment Programme will see their owners getting compensation, and the percentage of flats at this time selected for SERS stands at 4 percent, according to National Development Minister Lawrence Wong. 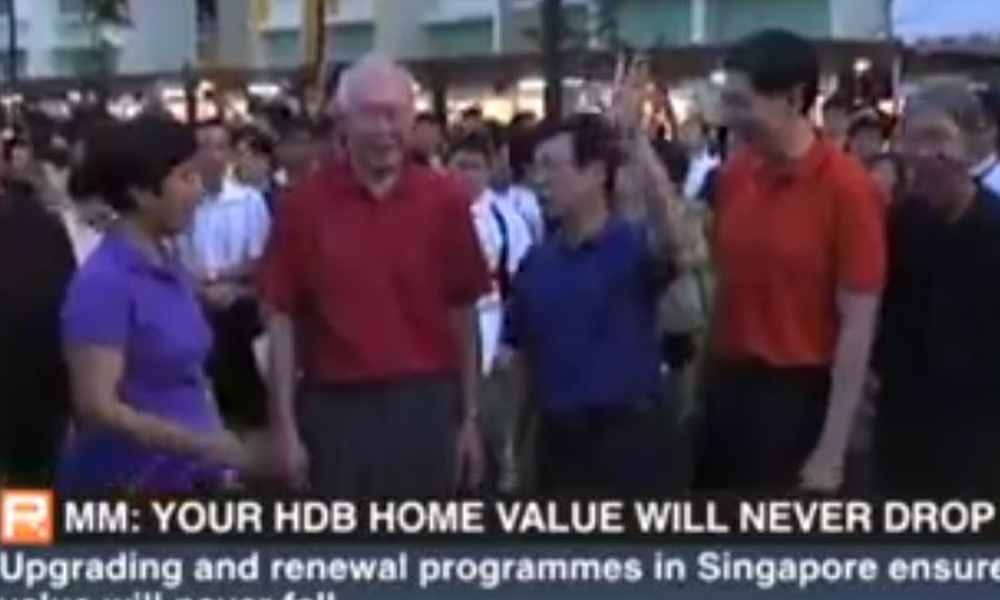 But Wong has his work cut out for him, thanks to that shorty in blue to the left of Lee (pictured above), former National Development Minister “Money” Mah Bow Tan, who came up with this whole HDB Enhancement Scheme.

Under Money Mah’s watch, HDB flat prices spiked by over 200 percent in less than half a decade.

Wong, to much cursing and swearing from the public, stated last year that the government will reacquire flats at the end of their lease.

He tried to hammer home the need for the government to do this in parliament yesterday, saying that future Singaporeans won’t get to enjoy subsidised flats if the government doesn’t “recycle” the land.

But Wong, seeing the unpopularity of his earlier public declaration, has tried to sugar-coat the issue by saying the retirees can still sell their aging HDB flats to cash out and fund their retirement.

That, naturally, has raised the question of who the unlucky chap is that’s going to be stuck with a worthless flat after paying a premium for it.

Singapore’s HDB chief has also said that the value of older flats will “commensurate” with their age.

Meaning, their value will follow market demand – i.e, the value will drop as more people are wary about buying aging flats.

And looking at the government restrictions on the use of CPF to buy older HDB flats, it seems like that government is trying to discourage plowing too much money into the purchase of these flats compared to spanking new BTOs – perhaps it knows that 20-30 years down the road the flats will be worthless?

The sad conclusion after all of these promises and wrangling is: perhaps the government did lie to the public about the value of their HDB flats.

Because it appears that the government promised us one thing years ago, and today the realisation is hitting home that those bold statements were perhaps just words blowing in the wind?