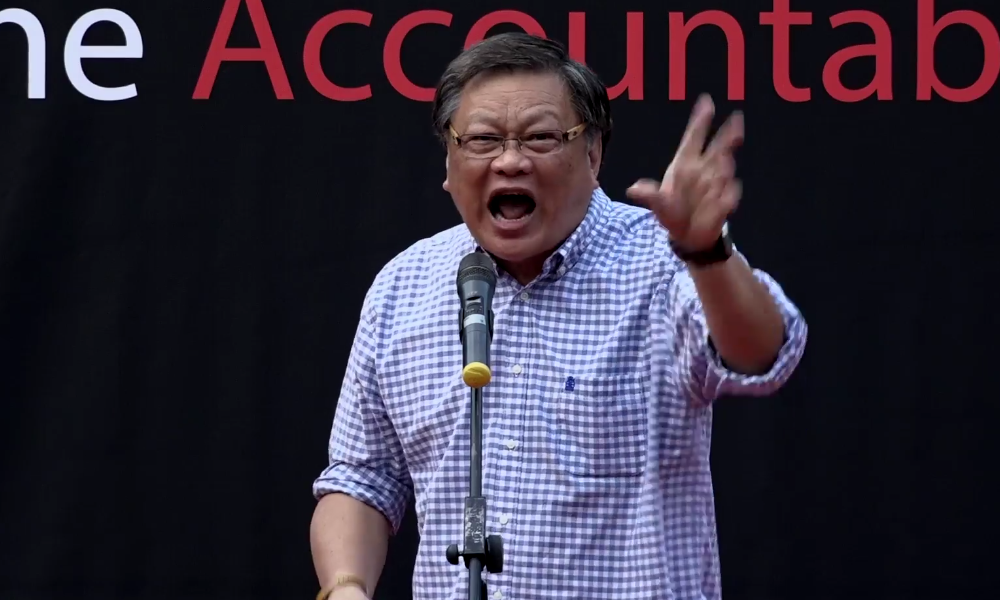 Financial advisor and socio-political activist Leong Sze Hian whacked the government for making life more difficult for the Merdeka Generation – Singaporeans who are born in the 1950s and set to be on the receiving end of a government bonus package to “reward” them for their contributions to nation-building.

Speaking at the “Where is the Accountability” rally yesterday (16Mar), Leong said that as someone who is eligible for the Merdeka Generation Package, he would receive a 5 to 10 percent subsidy on MediShield Life premiums.

However, at the same time, his MediShield Life premiums will increase by over 80 percent.

This, because the 4-years transitional subsidy for premiums ends in November this year.

“You give me 5 or 10 percent, you increase by 80 over percent, is that helping me? So when questions like these are asked, why is the government so silent? Where it the accountability? Actually, my friends in the Merdeka Generation would call this ‘adding insult to injury’?”

Leong also criticised the government, claiming that it is pocketing a surplus from Singaporeans contribution to their Medisave accounts.

“Your annual contribution to Medisave accounts in total is about S$10 billion. Your interest on all the Medisave accounts is S$4 billion. You add 10 and 4 together, you get S$14 billion dollars. This is the inflows from healthcare to the government. What about the outflows? The government’s operating healthcare expenditure in a year is about S$10 billion. The total withdrawals from Medisave to pay for medical expenses and insurance premiums is less than S$4 billion. Huh? So the inflows to the government exceed the outflows? What does this mean? We’re the only government that from a cash flow perspective doesn’t spend any money on healthcare. Another way of putting it – we’re the only government in the world that makes money from healthcare.”

Leong said that Singaporeans need to continue to press the government despite “government silence” on niggling questions regarding bread-and-butter issues.

“Accountability is the mother of all our problems. Because if the government is always silent on the questions that ordinary citizens ask, then I can tell you, maybe in the future less people will be brave enough to ask more questions.”
ke the entire government will turn up at the same reunion dinner every new year.”