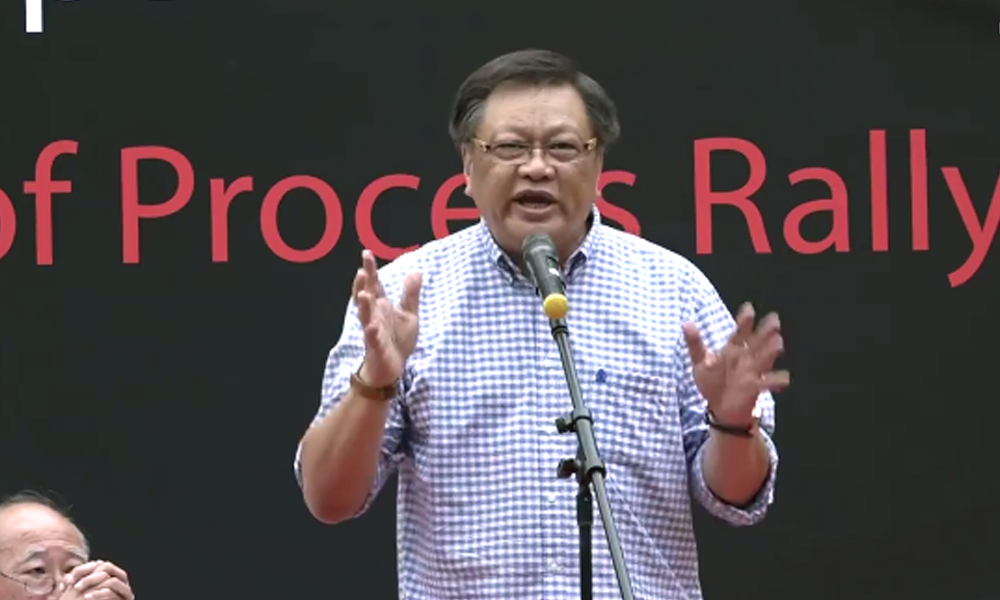 Decrying the government’s expenditure on social welfare, socio-political activist Leong Sze Hian told Singaporeans at the Abuse of Process Rally yesterday (26 Jan) that they are arguably the “most taxed, least-helped people in the world.”

Leong, who is being sued by Prime Minister Lee Hsien Loong for alleged defamation, also urged the public to demand accountability and transparency from the government regarding expenditure on CPF, public housing and healthcare.

“Singapore is the only country in the world where the government does not spend any money from a cash flow perspective on pensions, public housing and healthcare. In other words, the inflows every year exceed the outflows – meaning, they are making money.”

“The inflow of contributions to CPF exceed the withdrawals every year. How much of the returns derived from your CPF has been kept by the government all these decades since the CPF scheme started? Nobody knows. Where is the transparency?”

In a similar vein, Leong attacked the HDB for not being upfront with Singapore’s despite being persistently asked to reveal the breakdown of HDB flat costs.

“HDB, they tell you every year the more flats we sell, the more money we lose. What is the break down of the HDB flat price into construction costs and land costs? So many times, it has been asked in the newspaper forum pages, in social media, even in parliament. Have answer or not? Don’t have.”

Commenting on healthcare, Leong raised the example of how an elderly Singaporean was only eligible to use S$4.50 from his MediShield Life insurance to pay for an eye surgery that ran into thousands of dollars.

He said the government can but refuses to improve spending on compulsory health schemes such as health insurance MediShield Life and forced savings scheme Medisave to help Singaporeans cope with high and rising healthcare costs:

“This is the symptom of a healthcare model where the inflows exceed the outflows. Your Medisave contributions every year plus the interest on all your Medisave balances exceeds every year total government operating healthcare expenditure plus all your withdrawals from Medisave for medical expenses and premiums. So, in each of these 3 areas, the government is not spending enough money of you.”

Claiming that the government accumulated S$180 million in budget surplus over the past 10 years, Leong said that government policies must change because life is miserable for thousands of Singaporeans.

As for his defamation suit filed by PM Lee, Leong quipped that he wanted to thank the thousands of people who sent him messages of support and encouragement.

“You know when you are senior citizen at 65, all this helps a lot. Because cannot sleep at night, you read all these messages of support and encouragement, fall asleep very fast.”