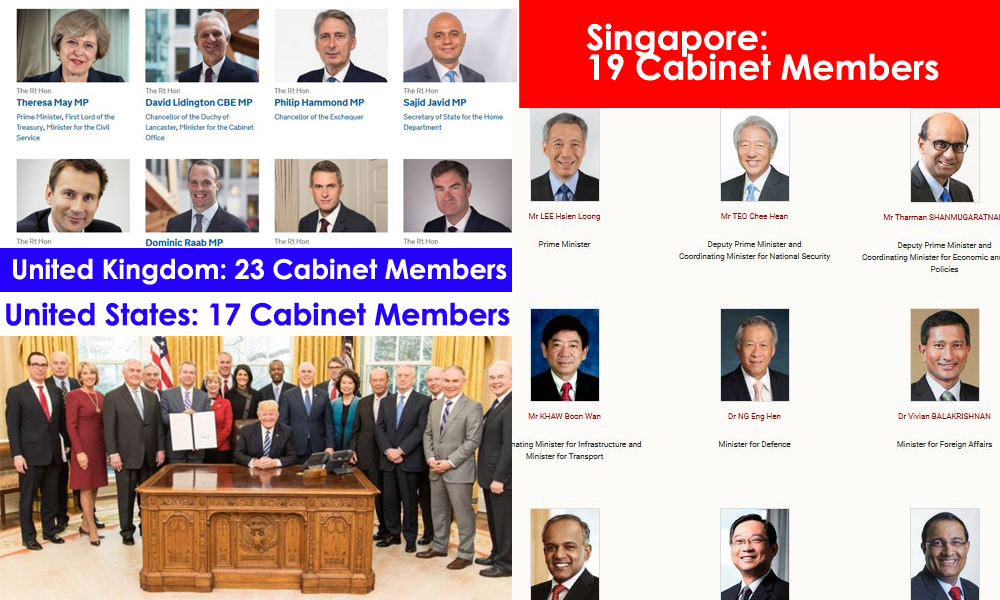 JUDY HO: Senior Minister of State for Trade and Industry Dr Koh Poh Koon said in parliament that growth in wages of resident workers has outstripped productivity growth, citing 2011 to 2017 figures that real wages rose by 1.9% during this time but productivity only increased by 1.1%.

Dr Koh said such a trend will have a negative impact on the economy.

I don’t know how Dr Koh and the MTI measure productivity, but when I look at the size of Singapore’s cabinet compared to other leading developed nations, I wonder whether wages of Ministers have outstripped productivity for far too long.

Singapore is 720 square kilometres in size and can hardly be seen on a map. Yet we require 19 Cabinet ministers, each earning upwards of a million dollars a year to run the country. This is not including all the ministers of states, mayors and other apparatus of the state.

The United Kingdom, our former colonial ruler, is 242,495 square km in size. It has 23 Cabinet ministers. And their Prime Minister makes less in a year than any of Singapore’s junior ministers. Ditto for the United States, where PM Lee’s salary puts Donald Trump’s to shame. The US has 17 Cabinet members despite being 9.83 million square km in size.

Unless you’re saying that it’s easier to manage the US and UK than Singapore, why in the world then does Singapore need so many Cabinet ministers? And why do we have ministers in the prime minister’s office and ministers without portfolio? What do they do?

These ministers have been earning million-dollar annual wages for far too long. Maybe it’s time to cut back on Cabinet and save some of our precious Reserves funding inefficiency.