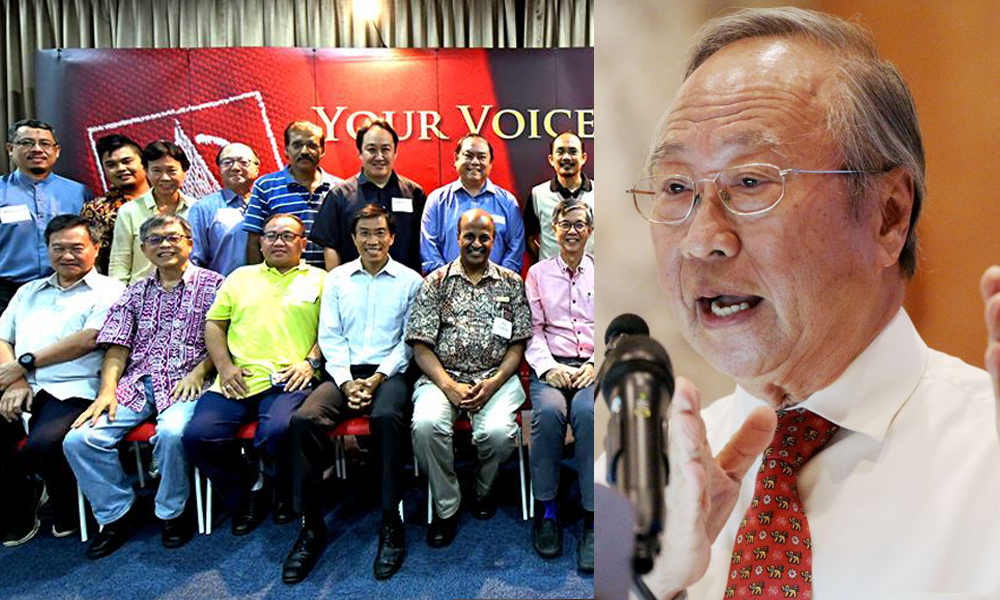 CHEONG CK: Dear Ed, I hope you can publish this because I really question Tan Cheng Bock’s motives. I’m in support of an opposition coalition, that’s why I am raising this now before it’s too late. Is Tan joining the opposition coalition to work with good people, or is he just trying to play them for his own political advantage or perhaps he is a “white” mole seeking to remove them?

Half of the opposition leaders are people he has criticised or condemned not too long ago, and they also whacked him back publicly, so why is he suddenly acting buddy buddy with them now? It seems to be someone who can “sleep with the enemy” just to achieve his aims? I hope the opposition can take a step back and think carefully about whether this is the kind of person they want to “lead” them.

The most obvious incident was when Tan approved the motion to get Dr Chee Soon Juan and other SDP members fined for contempt of parliament. The fine for all of them was about S$50,000 in total!

Tan was at the time a member of the Select Committee on Health Care Subsidy, and Dr Chee and co was accused to have presented fabricated data to the committee. Some choice words Tan reserved for Dr Chee and the SDP:

“I came out feeling sad and disappointed that a person like Chee, with a doctorate, could act and behave in such a manner, unbecoming of a man of his standing as a lecturer and researcher.”

“It is not a question of whether these four people are Opposition members or not. It is clearly a question of what must be done to a group of people who swear to tell the truth in Parliament but clearly did not.”

“The New Democrat, sees a repetition of all the points brought up by the SDP representors. They obviously do not care and do not intend to hear the truth.”

Even if Dr Chee is gracious enough to forgive Tan for biting him like that, can he really trust Tan to work with him as a partner?

Kenneth Jeyaretnam (TeamRP) also attacked Tan last year for for keeping his mouth shut instead of standing up for his father, the late JB Jeyaretnam, and lapping up all the PAP’s “cronyism games”.

“We all know the real reason for GRCs as much as we know the reason for reserved EP elections. Dr Tan Chen Bock didn’t object to GRCs as tainting our electoral system or when his SMC was absorbed into West Coast making it a bigger and more formidable GRC. I didn’t hear him complain that the people of West Coast were deprived of full citizenship by being denied the ballot box for over a decade.”
“Where was Dr Tan while this blatant fixing of the PE went on? Did he say that JBJ’s conviction should be annulled and he should have been reinstated to Parliament when the Privy Council asked the Singapore Government to do so back in 1988? Did he say that the PEC should not be using a bogus conviction to stop my father from standing? No, he kept quiet though he did pipe up nastily after the 1997 GE to say that JBJ should not accept an NCMP seat after he had criticised the scheme.”

“One should not be surprised by Dr Tan’s failure to speak up in 1988 or 1993 or 1997 or any other time. He was a PAP MP for 26 years. When he stood for President in 2011 he was perfectly happy with the rules designed deliberately to exclude almost all candidates unless they were beholden to the PAP and the Lee family in some way, either as a former senior civil servant, high court judge or CEO of a company with at least $100 million in assets.”

It’s not only Dr Chee, and the Jeyaretnams. Tan’s bad blood extends to the other popular Tan – Tan Jee Say. I was at the Silent Protest in Sept last year. Tan Jee Say was gracious enough to wait for the crowd to move away from Tan before moving forward respectfully to shake his hand, but Tan was so reluctant to shake hands. Just because you were former political rivals means you can’t show each other some respect? Maybe because Tan whacked Tan Jee Say and implied that he would be a “problem” for Singapore if he was elected president.

“I feel that there should be a politically neutral person in the position of the president and I think Kin Lian is the most neutral among the four. He is the only one who has never contested in a general election.”

Perhaps when he says some people need to take the back seat and help from behind, he’s talking about people like Dr Chee, Tan Jee Say and Kenneth Jeyaretnam. Now if he’s going to relegate all the opposition leaders to the back, who will he put to the front to stand as election? Those with no “baggage”, who are those with “no baggage”?

I think Tan will put in his own selected candidates for elections, when these candidates win the elections, the leaders like Dr Chee, Kenneth and Tan Jee Say who put in their resources to help him contest in the elections will become lame ducks in their own party. If that’s the case should the opposition still support him? Is this better for the “whites” or for the opposition? Perhaps this is his strategy, I think WP is the smarter one when it comes to this, avoiding it like the plague.

Dear Ed, if you really care about the opposition, please make sure that you make them understand this and go in with their eyes wide open. Thank You.