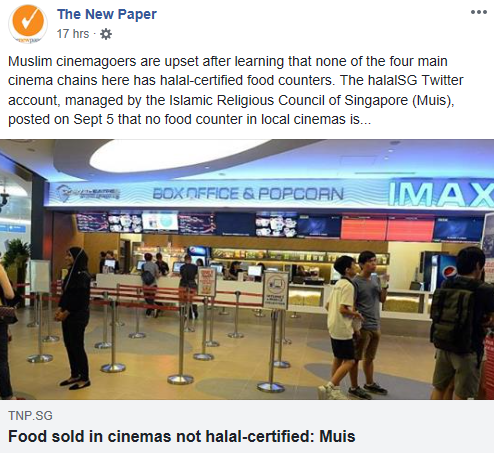 MOHD NIZAM: As Singaporeans, we have been taught to live harmoniously with people of all races. It is not just about tolerance but respect for one another’s beliefs. Small differences should not be made to become big issues.

“Muslim cinemagoers are upset after learning that none of the four main cinema chains here has halal-certified food counters. The halalSG Twitter account, managed by the Islamic Religious Council of Singapore (Muis), posted on Sept 5 that no food counter in local cinemas is…”

This is a very misleading post because it makes Muslims look very divisive. In the full story which I have attached and sent, there is no mention at all of Muslims who are “upset” as TNP claims. Even if there are small factions who are upset as claimed by TNP, is there a need to sensationalise the issue?

The next thing is, this is a non-story in the first place because the Muis post TNP refers to is a HalalSG Twitter reply to a Muslim who wanted to know whether cinema food is certified halal. HalalSG replies to such questions frequently on its Twitter page, so I don’t see why the whole issue of cinema food is such a huge concern.

If you go to TNP’s Facebook page, you will see that the divisive sentiments raised by TNP are not shared by many Muslims like myself. In fact, quite the opposite. 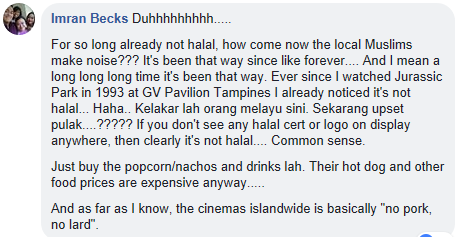 There are already anonymous people online who are stoking racial tension with fake news. I feel it is irresponsible for a newspaper to do the same by coming up with sensationalised stories with little substance to back their claims.

This is the report published by The New Paper, reproduced in full:

Muslim cinemagoers are upset after learning that none of the four main cinema chains here has halal-certified food counters.

The halalSG Twitter account, managed by the Islamic Religious Council of Singapore (Muis), posted on Sept 5 that no food counter in local cinemas is halal-certified.

A Twitter user named Gypsily had asked if the food at Golden Village cinemas was halal.

Replying to queries from The New Paper last week, Muis confirmed that it had not received halal applications from cinemas here.

The four chains operate more than 30 food counters in their cinemas.

Muslim cinemagoers who spoke to TNP said they were previously unaware that food in the cinemas was not halal-certified.

Student Fatimah Mujibah, 19, said: “All cinemas should apply for the halal certification.

“Halal options should be available for Muslims because outside food is not allowed in the cinemas.”

She added that most Muslims would assume that food sold in cinemas is halal.

“If the snack bars are not halal, then we should be allowed to take our own food in,” said Miss Fatimah.

“Then again, if everyone does this, the cinema could end up being dirty.”

Madam Kamariah Othman, 46, a teacher, said: “I do not see any relevant excuse for cinema snack counters to not get halal certification.

“After all, cinemas attract audiences of different races and religions.”

A spokesman for Cathay Cineplexes told TNP that not all snacks sold at its Cinesnax counters are halal-certified.

The chain, which has cinemas at eight locations across the island, operated halal-certified food counters at four locations in 2014, but the certification was not renewed in 2015.

Asked why this was so, the spokesman said she could not comment on the matter because of a recent change in management, with the new team taking over fully only in May.

She added: “We will continue to review our customers’ needs and feedback as part of our commitment to improve our services.”

Cinema chains Golden Village, Shaw Theatres and Filmgarde did not reply to queries by press time.

Rex Cinema, which shows mostly movies from India, said it could not comment as it was undergoing a change in management.

It costs about $750 a year for halal certification at a snack bar.

Mr Samuel Tan, course manager of the diploma in retail management at Temasek Polytechnic, said it is possible cinemas might find it too troublesome to get halal certification.

He said: “The effort and processes to convert the operations to one that is halal-certified can be tedious and costly as it involves drastic changes to material sourcing, kitchen facilities and manpower planning.”

TNP understands that Fish & Co has since resubmitted its application.

The Muis spokesman maintained that halal certification is voluntary for all businesses.

She said: “If an establishment is Muis halal-certified, members of the public should be able to see a valid Muis halal certificate on display within the certified premises.

“Consumers may also look up the list of Muis-halal-certified eating establishments via the MuslimSG app.”