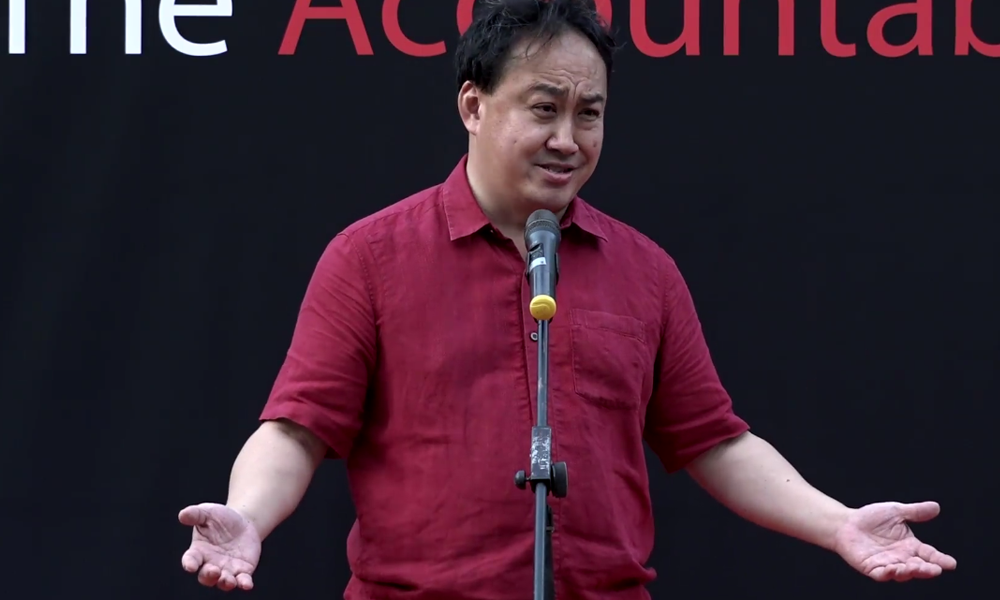 People’s Voice Party chief Lim Tean saved his harshest words for President Halimah Yacob at the “Where is the Accountability” rally on Saturday (16 Mar).

He said that one of the reasons why government accountability is in a poor state is because we have a “useless president”.

“Most people think that the president’s only role is to hold the second key to the reserves. That is not correct. Besides being the guardian of the reserves, she is supposed to be the guardian of the integrity of the public service. She can at anytime call a Commission of Inquiry to investigate into various aspects of public life, and the integrity of the public service is foremost and always one of them. Now I am suggesting to her, if she is doing her job properly, she would not have allowed the new Auditor-General, who is the wife of a Senior Minister of State, to be appointed. Ridiculous.”

Lim said that the government must be held accountable for what he claims was a rigged presidential election that saw Mdm Halimah, a PAP-favoured candidate to ascend the presidency.

There was widespread discontent in PE2017 from the Singaporean public due to the controversial circumstances in which Mdm Halimah – the only candidate approved to contest – was “elected”.

“You are just diminishing the Office of the Presidency, which is supposed to be a symbol of our statehood. Why? Because you need to win. Because you need to prevent someone from becoming president, who will hold you accountable on a range of issues – such as CPF, the state of the Reserves, and many other things.”

Lim said that the government has become complacent, and government leaders prone to passing the buck for mistakes, because of the lack of a strong opposition to keep leaders in check.

“Public accountability in Singapore ended the day Goh Chok Tong said in 2015, shortly before the General Elections, ‘We are our own checks. Don’t fall for the seductive lie that there must be checks and balances. Well, Goh Chok Tong is no sage. Because look at our country 4 years on.”

Rounding up his speech, he said:

“Public leadership means trusteeship. You must have the trust of the people when you hold public office. And if there is no accountability, trust in the government institutions diminish.”