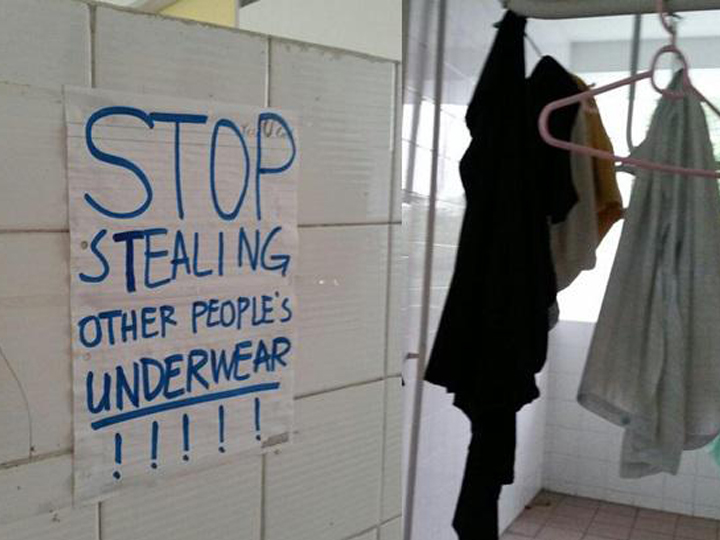 An underwear thief is apparently on the loose at a hostel in Nanyang Technological University.

Frustrated female students report finding their bras and panties missing, after they hung them up to dry in the laundry room of Hall 6 Block 33.

This thief has expensive taste, as according to the girls, he only pilfers branded lingerie.

So far, at least 3 girls have had their underwear stolen, with some pairs worth over S$100.

Angry at the spate of thefts, one student has put up a sign telling the thief to stop his lingerie-looting ways.

The student also posted a message on a discussion forum:

“To the underwear thief who strikes at Hall 6 Block 33, you’ve repeatedly ignored the warnings that were put up at the laundry drying area (and) neither the security gate nor the hall’s email can deter you. “I have little choice but to leave you this note. Stop what you’re doing.”

The underwear thief could have gained access to the laundry room by disabling the entrance gate with this sticky tape, which was found pasted over the gate’s, magnetic strip.

Victims of the underwear theft have called for increased security, including the placing of CCTV cameras outside the laundry room.