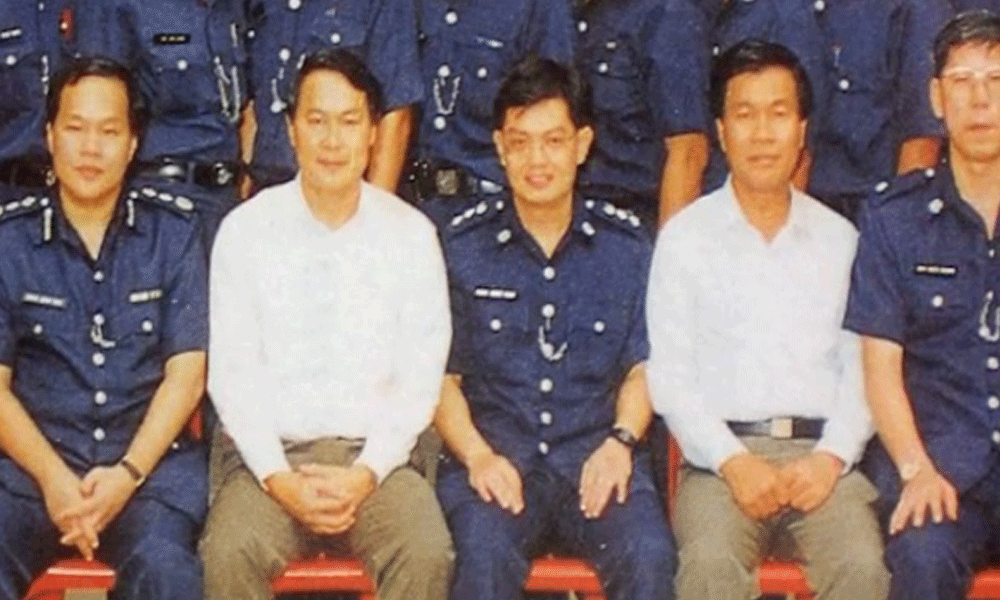 KENNETH JEYARETNAM: When I was studying economics at Cambridge in 1980 I remember one occasion when I invited a group of Singaporeans studying Economics round to dinner at my college, Queens’. Most of this group were Government scholars that included Shaun Seow, who later became the head of Mediacorp. I did not benefit from a Government scholarship so I had had to complete NS first  and I was about two/three years older than the scholars. It was a jolly occasion.

During dinner I remember being momentarily blinded by the light reflected from a pair of highly polished shoes belonging to one of the scholars. I recall him as being small in stature and also fairly reserved and quiet though pleasant and polite.  Even if the other scholars hadn’t used his rather disparaging nickname “Little Police scholar” his shiny shoes would have been a huge clue.

Swee Keat did not reciprocate the dinner invitation and I did not see him again after uni. Like his predecessor at MOF, Tharman, whom I got to know a bit better, he was careful to heed the PAP health warnings and not let any association with me damage his career prospects or financial health.

It came as no surprise therefore, to learn via state media that Little Police Scholar, my old Cambridge colleague Heng Swee Keat, has been appointed as the PAP’s first assistant secretary-general which based on past precedent means that he will be the next PM when Lee Hsien Loong decides to step down.  Before long, our Little Police Scholar will be the biggest Policeman in our land.

Despite a fairly undistinguished academic record (he got either a 2:1 or 2:2), Heng has ascended rapidly up the well-trodden Civil Service/PAP fast track escalator. In Singapore we have seen that the Civil Service and PAP political office are interchangeable. As the PAP has a cadre system, copied from the Soviet and Chinese Communist Parties and in turn copied by every other political party in Singapore except the Reform Party, Heng would not be appointed unless he was the chosen candidate of Lee Hsien Loong.

Talking about family dynasties is almost a criminal offence here in Singapore. The Government is quick to claim “meritocracy” whenever anyone questions the fitness of the Lee family, their wives and relatives to get the lion’s share of plum jobs and pay themselves outrageously (and secretively) . The Lees we are told, have these positions, not because they are a dynasty but  because their academic qualifications are better than any other candidate’s.

This is difficult to claim in the case of Heng Swee Keat who did not have a stellar academic career.  So now state media is taking a different tack, calling in the usual safe, pro-PAP talking heads such as Eugene Tan or Gillian Koh to label him as “humble”, a “consensus builder” and a “likeable character”.   It is true that, in the words of Winston Churchill, Heng Swee Keat is a modest man who has a great deal to be modest about.

The PAP changes its tune whenever it suits them. It would be impossible to describe LHL as humble or possessed of any shred of EQ so in his case the selection criteria for PM role are based on academic achievement. When academic achievement doesn’t stack up then selection criteria is based on personal qualities. When the PAP doesn’t want a brown PM, “the people aren’t ready for a minority PM”. When the PAP does not want another very able former PAP MP to be President the criteria is ethnic minority only.

In case anyone thinks I am on the side of the elitists, I have never believed that a first-class academic record means that someone will automatically make a good leader or politician.  I am merely interested in demonstrating PAP hypocrisy. All the things that the state media are saying about Heng could have been said about his predecessor at MOF, Tharman, who was undoubtedly better qualified to be PM. Unfortunately, Tharman is not a member of the Majority Race so was never in the running. Nor would LKY have tolerated someone from an inferior race as his PPS.

The most important qualification Heng has for being PM is undoubtedly his proven loyalty to the Lee family. He was praised by LKY as the best PPS he had had and is shown seated next to LKY at the latter’s 91st birthday party.

The fact that Heng is much older than the only other serious candidate, Chan Chun Sing, and that he needs to be careful about his health following his aneurysm, also means that he may be much more amenable to stepping aside after a few years to hand the reins of power to the third generation of the Lee family.  If the LHL had been serious about handing long term real power to a new PM he would have chosen someone younger and in better health.  As it happens, Li Hongyi, according to my grass roots sources, is already walking the ground in Holland-Bukit Timah with Vivian Balakrishnan.

Interim PMs and seat warmers may come and go but the abiding principle of Singapore’s politics will continue to be that the country belongs to the Lee family. This will endure as long as the PAP are in power or there is a fresh generation of Lees ready to take over. Singaporeans on the whole seem fairly contented with a hereditary monarchy and no doubt over the next five years we will be treated to many anecdotes about Li Hongyi being a “man of the people” who works tirelessly to ensure our welfare.

When it is Heng’s turn to step aside for a Lee, the criteria will flip back once again to being about academic achievements. Meanwhile we can only hope that Heng’s bark is worse than his truncheon and that he does not use those shiny boots to trample on those who oppose him or his masters.