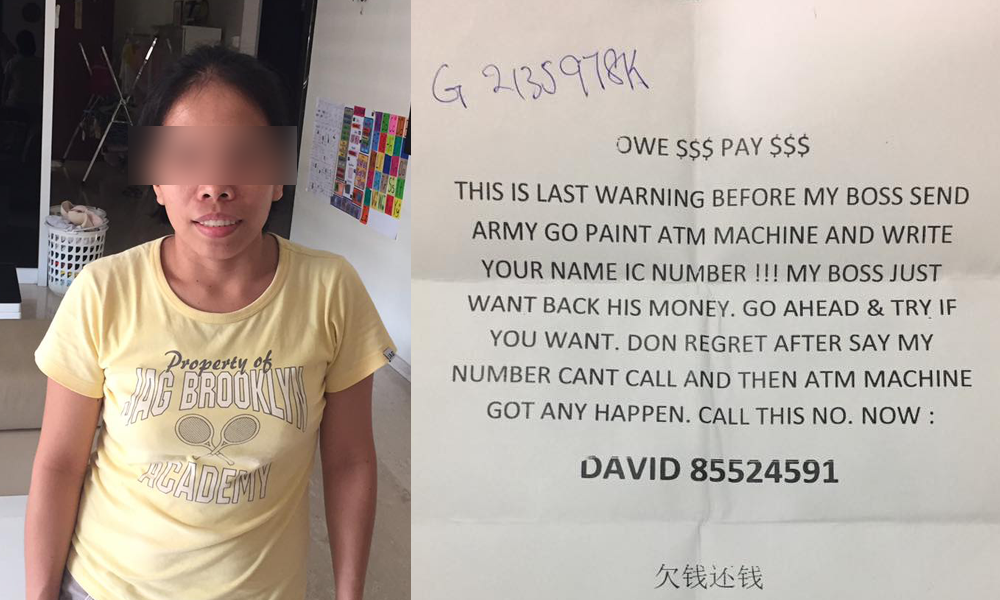 Imagine if you hired a maid, only to receive debtors’ notes from not 1, but 5 moneylenders because she took out loans using your address.

That’s what happened to Velle Yee.

Yee filed a police report because her maid allegedly took out loans using her contact details in her loan application.

She said that when confronted, her maid denied any wrongdoing.

But, the debtors’ notes kept coming.

Yee said that she finally cancelled her maids’ work permit after receiving a threatening letter from a moneylender.

Her maid, who was detained by police, was reportedly deported in April this year. 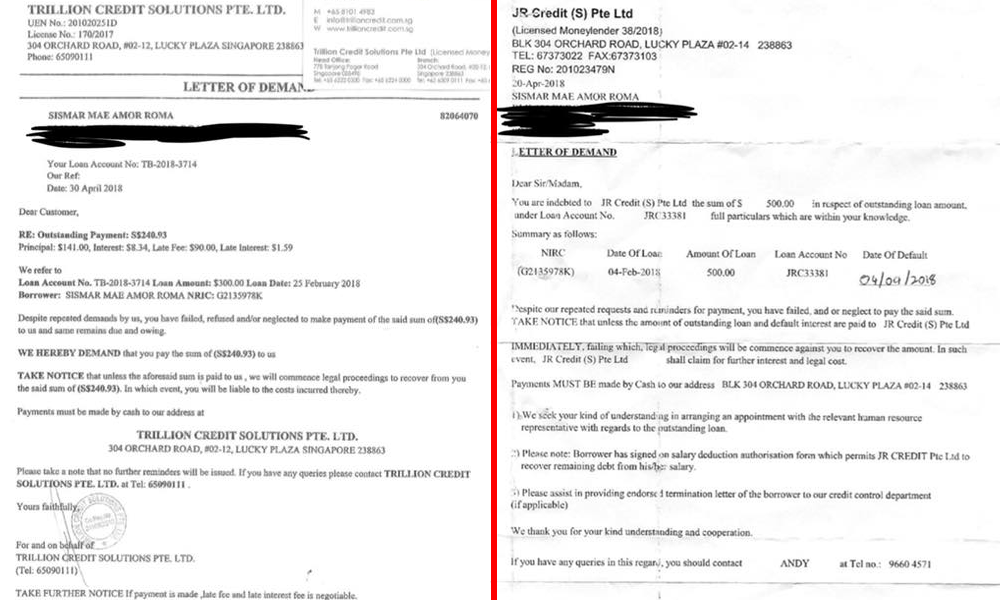 This is Yee’s story, reproduced in full:

“In October 2017, we discovered that FDW (foreign domestic worker/ maid/ helper) had taken a loan out from a licensed moneylender (1st LG Credit Pte Ltd). We filed a police report on this incident because she had used my contact details in the application without our knowledge. The police report was filed to protect our interest and there was no further follow-up from the police.

On April 23, 2018, a letter was delivered to our house from another licensed moneylender (JR Credit (S) Pte Ltd) demanding past due payment for an outstanding loan. When confronted, FDW claimed to have paid the loan back in full, but when we followed up with the moneylender, this was not the case. Given her history of lying, we made the decision to cancel her work permit and send her home as we have two small kids in the house and were concerned about our family safety. Her work permit was cancelled on April 24, with a ticket purchased to Davao City for April 26.

Immediately after cancelling her work permit, we received a threat letter from an unlicensed moneylender in our mail addressed to FDW and our family regarding a past due loan. We immediately filed a police report of the incident. FDW was confronted and denied everything. However, upon further pressure, it became apparent that she had MULTIPLE LOANS outstanding, both licensed and unlicensed. However, nothing she was saying added up.

We called the police again that evening and asked them to come to our home. They arrived and attempted to piece together the truth from her in which they finally found over $2100 in outstanding debt, licensed, unlicensed and installment purchases from at least 5 MONEY LENDERS. The police took her into custody for further investigation. She remained in police custody until her flight home on April 26 when she was escorted to the airport by the police.

There are two additional key pieces of information:

1) We have a family trip planned for holidays. We made plans for FDW to take home-leave during this period. She was notified of this on April 10, to depart in May. It was after this she started a spending spree as was uncovered by the police – buying gold jewelry, new phones, and after her departure packages were delivered to her at our address cash on delivery (which we rejected). We believe she did not intend to return at end of leave.

2) FDW has been a habitual liar about everything since joining our family. Any time she was confronted over an error made, work not completed, or as above, the loans, she immediately denied everything or placed blame on someone else. The only reason we tolerated this was due to the effort and cost involved in replacing an FDW in Singapore.

I’m quite sure her next target is expat employer!

FYI she gets her 4 Sunday offs n Christmas off out of goodwill. As you can see how free n addicted she was to her hp as she kept hers. She also had two hand phones that we only found the day we confronted her which was the day polices came to our place.

She has been also buying jewelries on installments n pawned them immediately for cash to send back home coz I have been gettin pawn letters from MAXICASH etc.