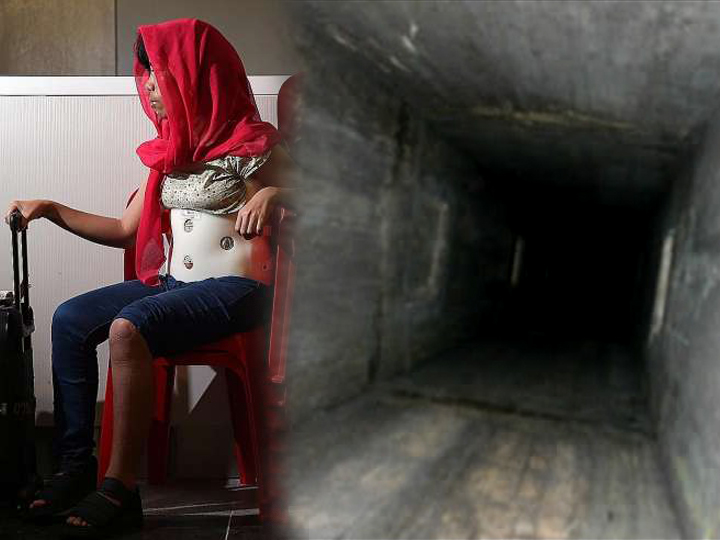 She wasn’t abused or mistreated, but the endless scoldings every day had gotten too much for her to bear.

And the straw that broke the camel’s back – her employer dumped a tub of hot water into the sink while she was doing the dishes.

That’s when Rindu decided she had to escape.

The next day at 6am, she grabbed some clothes and blankets to make a rope, and made a dash for the rubbish chute of her employer’s HDB flat home.

Despite it being 7 storeys high, she thought it better to try her luck.

Unfortunately, her plan fell through and she fell 7 floors down onto a heap of trash, getting her lip and leg broken in the process.

Rindu was discharged from the National University Hospital last month after 3 operations.

The 27-year-old Indonesian has to wear a waist brace and has 8 rings attached to her spine to keep it in place.

She is now resting in a shelter in Batam.

Rindu was hired to do the housework and take care of her employer’s teenage children.

She said that she had a good relationship with her employer, and would join the family for gatherings, and was even allowed to go to a hair salon once.

But she says that one month into her stint, her employers suddenly gave her the cold shoulder even though she had been doing things exactly the same way.

Besides the daily scoldings, she says that her employer would play mahjong at least 3 times a week, with sessions lasting until 5am at times.

She had to wake up at 5am to prepare coffee for the children.

The incident came to the attention of Singapore’s Humanitarian Organisation for Migration Economics (HOME).

It’s the first time in Singapore that a maid tried to flee home via a rubbish chute.

HOME director Jolovan Wham says an incident like this could have been prevented if she had been given days off to let off steam.

“The stress of living and working with her employer became too overwhelming and led to this.”