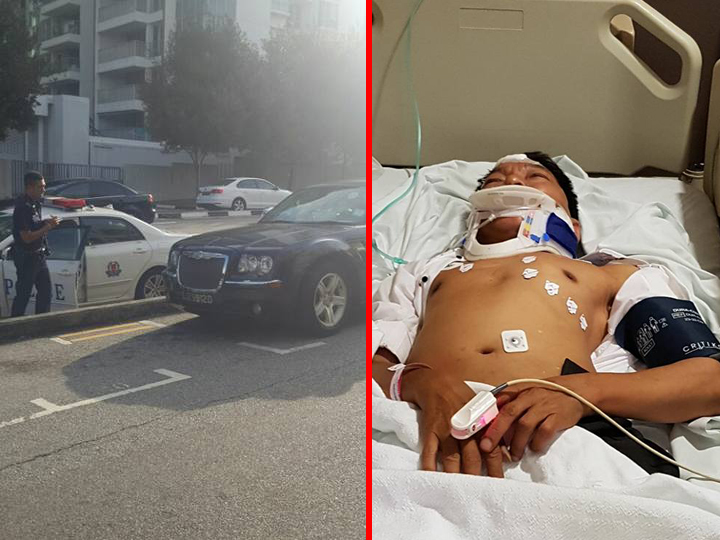 JESLYN LEE: Dear fellow friends out there! Good day to all of you.

I would like to bring to all of your attention that this incident happened on 14 June 2017 at about 1830 hours at Simon Road along Upper Serangoon Road. Victim is my father aged 67. He’s a full time Grab driver and also a breadwinner to support the family.

The commotion happened that while my dad is waiting for the available lot in front of him along the side road, his vehicle was stationary ‘NOT’ blocking any accessing vehicle, happened that there’s a car (picture as attached. Car plate no. SJT2362T) was coming out of the lot, the driver wasn’t able to make his way out of the lot. Instead he got out of his car & marched towards my dad’s car and bang his door demanding him to get out and/or rather to move away his stationary car – Indeed my dad’s car wasn’t blocking his way at all.

Without saying much the assailant start to rain his fist at my dad’s face/head. As he was trapped in his vehicle he couldn’t open the door. He couldn’t avoid but wanted to distract his assailant therefore his left hand happened to find and took a air-freshener can which he thought of spraying at him. Unfortunately the assailant managed to grab the air-refreshener and he used it to hit against my dad’s face/head causing him a deep laceration cut on his forehead and bruises. Only after my dad start to bleed the assailant stop & walked back to his car. Mr. Lee then called the police for assistance. 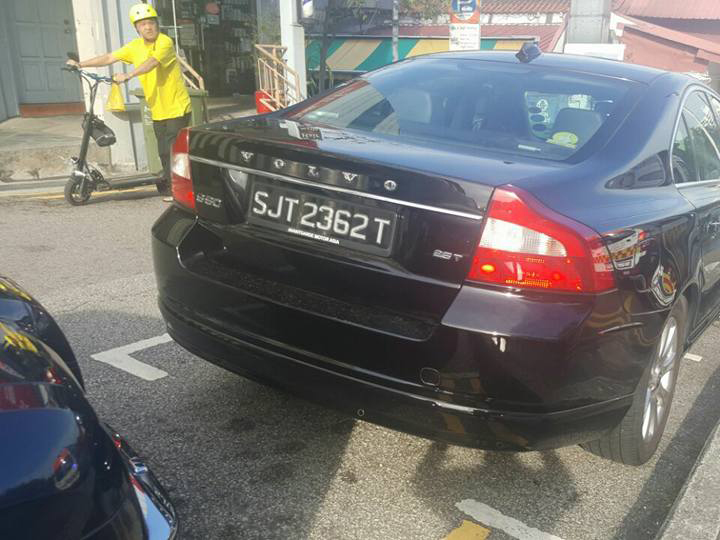 As mentioned the assailant wanted to drive off but my dad managed to reverse his car to block the assailant’s way, at that point he is still bleeding badly and await for the ambulance to arrive.

I need to highlight the fact that he’s an old elderly small skinny built man with previously had a long surgery operation done on his back, and the assailant is somehow in his mid 30s chinese with big built, how can we tolerate such vicious and indignation act, instead of we should help and respect the elderly as they are all our pioneer folks to be respected.

My dad was conveyed to TTSH on 14 June’17 evening about 1715 hours. He’s still being under observation by the attending doctor.

The images also shows the location of the scene and with the road rage carplate.

I need to emphasize the fact that the assailant is a heavily tattooed person neither do I want or wish to comment much and discriminate against his appearance but his actions cannot be forgiven nor acceptable.

On a separate note, it’s been 3 days and the assailant had yet to make any restitution of his actions to even pay the victim any visits nor comment of the victim’s recovery as the assailant is somehow not showing any remorsed by his actions.

As we did not manage to capture the face of the assailant or his particulars, therefore we seek all our friends here to share this post and hope that we are able to trace him.

Many would be wondering why we are unable to track since there is the car plate number. The problem is when police arrive, they took down their statements. There is no immediate arrest. The guy left after taking his statement.

The reason for this post is we wan to trace him because we wan to expose him via social media. The police unable to reveal to us his particulars.

Got something to say?
Drop us a message on Facebook! https://www.facebook.com/redwire.singapore