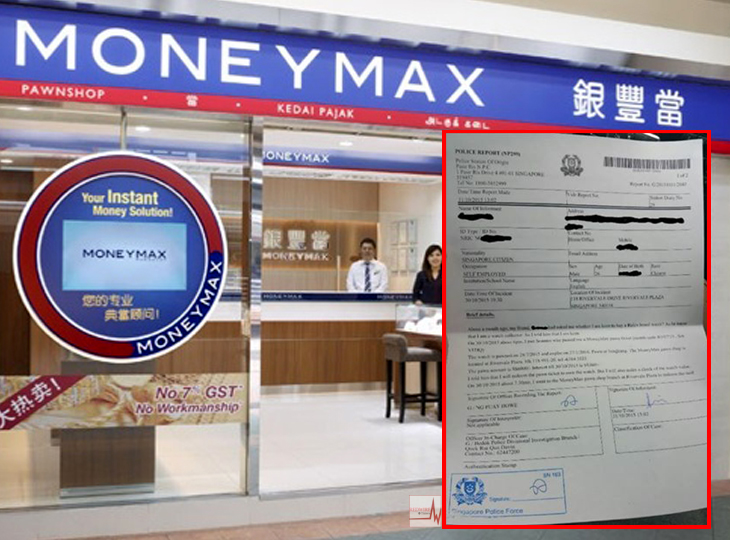 JEFFREY: I’m loss for words and disappointed with Money Max’s service. We redeemed a Submariner Hulk from Money Max(Rivervale Plaza Outlet) on the 30th of Oct, roughly at 7.30pm. Asked the staff if we could view the watch first before redeeming because we bought over the pawn ticket.

As we are considered the 3rd party. Staff reply was “No. You have to redeem it first. And you can hug IT and sleep with it for the whole night” referring to the Hulk. Before redeeming we asked her whether it was authentic OR NOT. She said, she doesnt know. Fine. We were skeptical about redeeming it but still we went ahead because HELLO ITS MONEY MAX ITS A REPUTABLE COMPANY LEH!!!!! So after redeeming we went to look for a friend who is specialises in watches and after much inspection at it he said we got duped, Its fake.

Secondly, we asked since it was less than 12 hours can we pawn back the watch? They say impossible cause there’s no valuer to inspect the watch. Less than 12 hours, the pawn ticket serial number matches the one with the watch STILL NEED INSPECT MEH?

Thirdly, we demanded to speak to the in charge. We told her we are going to report this matter to the police and she told us to go ahead, at the end of the day we confirm lugi not her. K can. She still told us to try pawning the watch at other outlet as her Rivervale plaza’s outlet only take in gold & NO WATCHES. And so we went to other MM outlet and the valuer refuse to take in the watch stating that the piece DO NOT LOOK AUTHENTIC. We showed him the receipt and tallied the serial number and he confirmed that both the serial number on the watch and the receipt is the same and is also puzzled why did the rivervale plaza outlet let us took out a NON authentic watch, as i believe that the staffs there were aware that the watch was NON authentic as she said as I mentioned above that she said she do not know if the watch is authentic or not.

See the thing now is, MM’s policy is you get back what you pawned. But I’m confused to HOW CAN SUCH A REPUTABLE COMPANY ACCEPT A NON AUTHENTIC WATCH? And if Money Max checked thoroughly they would not have taken in this watch, and none of this would have happened & we wouldnt have to go through all the troubles of verifying and making a police report. Policy is use mouth say one theres no black & white and even if there is I HAVE NOT SEEN IT. All I know is that the watch I redeemed from Money Max is NON authentic and the company refuse to be responsible.

Btw, theres no law in Singapore which state that buying a pawn ticket is illegal. WE DO NOT KNOW THE OWNER. This post is to let others know that even such a reputable company cannot differentiate AUTHENTIC AND NON AUTHENTIC. Such a disappointment. Money max has failed terribly at its service.

After visiting the police station and CASE Ive finally come to a conclusion to why the manager told us to go ahead with the report its because basically theres nothing CASE & SPF can do.

We know every company has their own policy but are you being fair to your consumers? How can you not check the authenticity of the watch beforehand? This is so unethical for such a big company to make this kind of mistake.

Just to clarify that the stated name in the statement, Seamus was not the one that cheated me.

He’s a good friend of mine he got cheated as well.

Thanks Jeffrey for this letter.
Send us your letters at mail@redwiretimes.com
Find us on Facebook! https://www.facebook.com/redwire.singapore