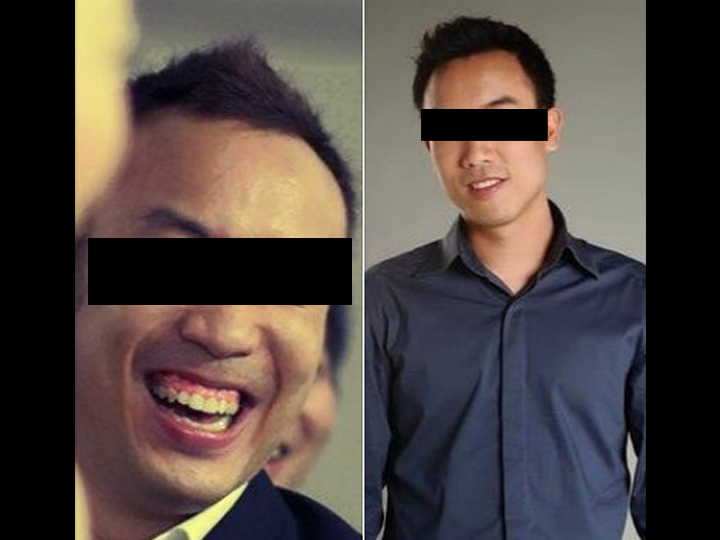 A netizen has accused an officer with the Singapore Police Force of impregnating a girl, and asking her to abort the twins in her womb after she got pregnant.

Bryan Yap says his friend was duped by the cop into believing he was single.

Yap says the couple had a discussion after she found out she was pregnant, and finally decided to get rid of the foetuses.

After that, the errant officer allegedly went into hiding and was uncontactable.

(Ed’s note: The “errant officer’s” name and image has been withheld to protect his identity to guard against  false allegations. Or, “innocent until proven guilty”, as the law likes to say.)

“Since he wanna go mia, then we shall make him famous.

This guy SC have been dating my friend for a few months. My friend was hesitant about this at first because she thought that he’s married but went ahead after he gave her assurance that he’s not and things might worked out between the 2 of them.

Last week, my friend discovered that she is pregnant with his child. They both came to a conclusion that they shall not keep the pair of TWINS. During the discussion he only mentioned that he doesn’t want the child but yet he hope that they can still try to work things out. That VERY DAY, he turn on his words. He went MIA.

How dare him out my friend thru this murderous act alone of aborting the TWINS?

I can understand if he’s panicking if he’s 16. But he’s 38. He holds quite a high position in the Police Force. If he doesn’t wanna be responsible in the first place, why did he commit the act? To make things worse, he decided to hide like a coward. Shame on you. How are you going to lead your man if you can’t take responsible for your own actions?

The reason I’m writing this is because I think NO girls should be going thru what my friend is due to the immature actions of a man.

His job is to give assurance to us normal citizens and yet the irony.

BTW Sam, if you are reading this, you’ve 2 human blood on your hands.

LATEST UPDATE!
This guy is attached. Which means he have been cheating on his current gf. What a prick
4.39am – he deactivated his social account.” 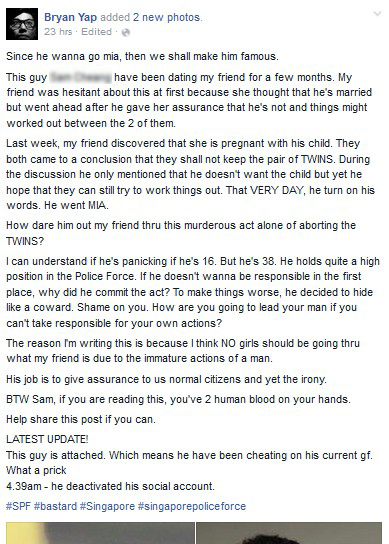