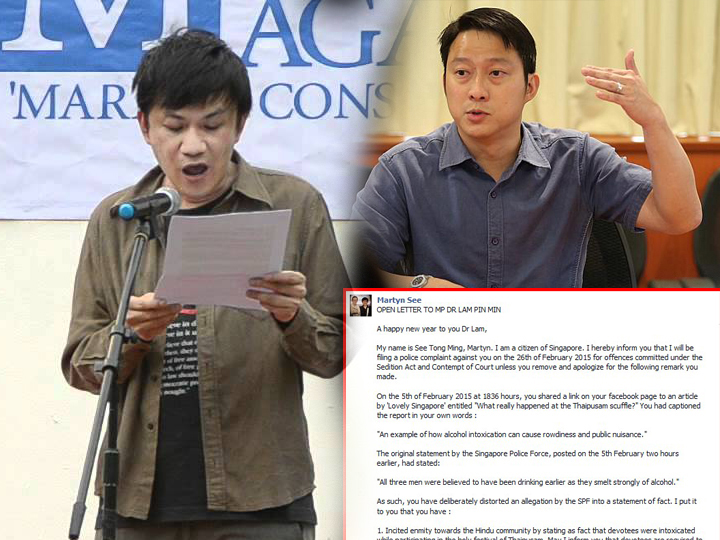 He wants MP Lam to remove and apologise for a Facebook post, in which Lam said that the Thaipusam scuffle and rowdy behaviour that caused a public nuisance was a result of alcohol and intoxication.

See also accused Lam of generating hostility against people of different races and communities with that post.

See said that Lam’s accusation of the three men arrested, when put in such definite terms, could prejudice the court and affect the court’s judgement. 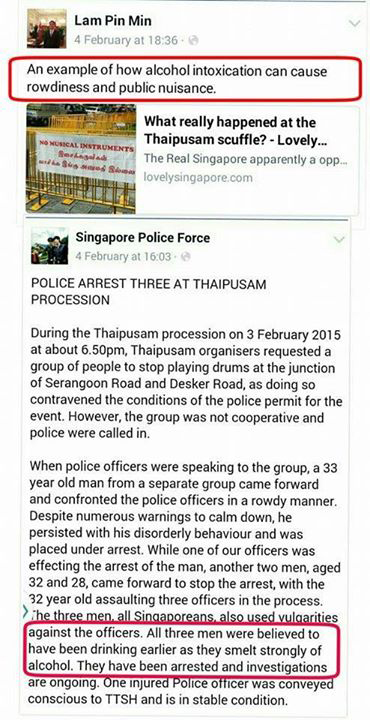 Martyn See is best known for his 26-minute -long film, Singapore Rebel, about SDP chief Chee Soon Juan. In 2005, the government ordered him all footage of the film, and threatened to prosecute him under the Films Act.

His latest 2010 film, “Dr Lim Hock Siew”, about the late doctor, politician and ISA detainee, is banned in Singapore.
This is Martyn See’s open letter to MP Lam Pin Min

A happy new year to you Dr Lam,

My name is See Tong Ming, Martyn. I am a citizen of Singapore. I hereby inform you that I will be filing a police complaint against you on the 26th of February 2015 for offences committed under the Sedition Act and Contempt of Court unless you remove and apologize for the following remark you made.

On the 5th of February 2015 at 1836 hours, you shared a link on your facebook page to an article by ‘Lovely Singapore’ entitled “What really happened at the Thaipusam scuffle?” You had captioned the report in your own words :

“An example of how alcohol intoxication can cause rowdiness and public nuisance.”

The original statement by the Singapore Police Force, posted on the 5th February two hours earlier, had stated:

“All three men were believed to have been drinking earlier as they smelt strongly of alcohol.”

As such, you have deliberately distorted an allegation by the SPF into a statement of fact. I put it to you that you have :

1. Incited enmity towards the Hindu community by stating as fact that devotees were intoxicated while participating in the holy festival of Thaipusam. May I inform you that devotees are required to undergo a strict regiment of fasting and abstinence from meat and alcohol. Members of the families of kavadi carriers are also required to undergo such a regiment, albeit for a shorter period.

2. Caused ill-will and hostility between different races and communities. The responses on your facebook page show overwhelming hostility to your remark. Yet, you have allowed your offensive post to remain online, while you continue to publicly tout Christian teachings on your personal facebook wall. As a Member of Parliament, your lopsided attitude towards the religious sensitivities of Singaporeans, particularly against the Hindu community, is vexatious.

3. Committed sub judice contempt of court by risking prejudice which may affect the final determination of the ongoing case against Ramachandra Chandramohan, Jaya Kumar Krishnasamy and Gunasegaran Rajendran, who are due to undergo trial for disorderly behaviour. The three men were charged in court on February 7th. Your facebook posting has remained online to this day. It has since been reproduced in online forums and blogs. A google search of “Thaipusam alcohol”, “Thaipusam intoxication”, ‘Thaipusam rowdiness” and ‘Thaipusam public nuisance” show up your statement as the top search result.

As this is the Chinese New Year season, I wish to offer you a grace period of 3 days to correct your facebook post and make a public apology to the Hindu community. Failing which, a police complaint will be filed by 12 noon on the 26th of February 2015.

If you are so hung up in equating alcohol consumption with public nuisance, I suggest you speak up against the police’s approval of the St. Patrick’s Day street parade on Boat Quay slated for March 13 and 15. In Dublin, such celebrations have been marked by incidences of teenage drinking and street violence.