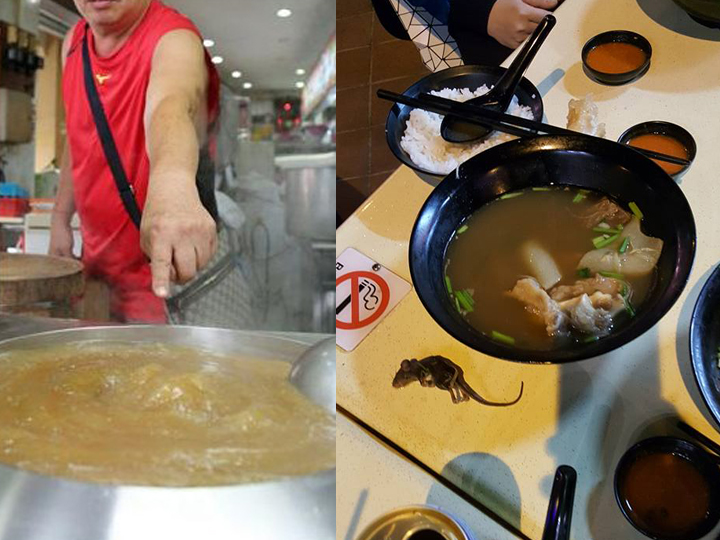 Who let Mickey in the broth?

That has become a source of dispute between the mutton soup stall accused of serving soup with a rat inside, and the kopitiam where it is situated.

The incident started on Monday when Quek Yong Pheng and his pals found a dead rat in their soup.

Mr Quek says all 8 of them were eating at the Kong Kee Mutton Soup stall and ordered a bowl of soup each.

One of his friends was very full, and fished out what was thought to be a piece of mutton, to put in another friend’s bowl.

That’s when he realised he had fished out a rat.

The mutton soup stall owner came over and apologised and even gave them a refund on their dinner, which amounted to around S$42.

Mr Quek says she told the group that the rat might have fallen from the rafters into the pot of soup in the kitchen.

The NEA is now investigating the incident.

Kong Kee’s stall owner says that it’s impossible that the rat was cooked in the pot of soup.

She said that if it had been boiled in the pot, its meat would have disintegrated and diners wouldn’t have found its whole body intact in their bowl of soup.

She added she practices high standards of hygiene, and that her stall is cleaned 3 times a day.

The stall owner said that her ingredients are placed aside in bowls when she cooks her mutton soup, so she would have smelled a rat.

“If there’s a rat, I would have noticed it while preparing the ingredients.”

Kopitiam owner Raymond Tan said that he keeps the Sin Yew Huat Eating House premises clean, addeing that the stall owners and staff there keep the place clean and the stalls and toilets are washed often.

He denied that there are any rats at the kopitiam.

Tan said that he saw the mutton soup stall owner continue to dish out soup to customers at other tables even after the rat incident.

He did mention that while the mutton soup stall had been running for 20 years, this was the first time it had a rat incident.