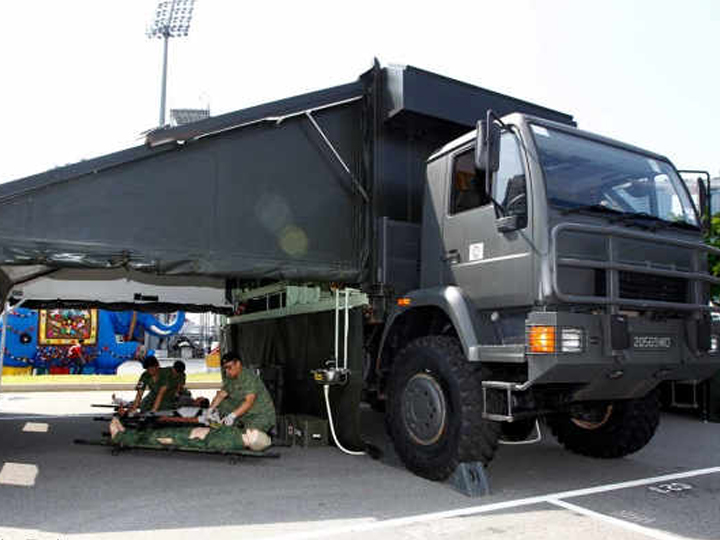 MinDef has refuted what it said were false allegations in certain online articles that the mobile battalion casualty station bought by Mindef had infringed MobileStats Technologies’ patent for its mobile clinic “Mobile First Aid Post”.

In a Facebook post, the ministry also said that the online articles wrongly suggested that MinDef was forcing MobileStats to close down, so as to take over the patent rights.

It added that if anything, MobileStats should go after its vendor, Syntech, instead of taking MinDef to court.

Some of you may have come across online articles alleging that the mobile battalion casualty station (BCS) bought by MINDEF had infringed MobileStats Technologies’ (MobileStats) patent for its “Mobile First Aid Post”. On top of that, the articles suggest that MINDEF is forcing MobileStats to close down, so as take over the patent rights.

It sounds like a great story, but all these accusations are false and baseless. We spoke to MINDEF’s legal team to find out more, and decided to put out some facts so that you know the truth.

First, the false allegations of patent infringement are not new. Since 2011, the owner of MobileStats has repeatedly turned to the media to accuse MINDEF of infringing its patent. Second, these accusations have been deliberated by the High Court and found to be untrue. In January 2014, the Court declared the patent invalid and revoked it. The Court also found that MINDEF had not committed any Intellectual Property infringement. We are disappointed that the owner of MobileStats has disrespected the Court’s decision, and continues to make false and unsubstantiated accusations against MINDEF. MINDEF regards these allegations very seriously and is referring them to the Attorney-General’s Chambers for advice.

If you still have burning questions, read on.

#1 Did MINDEF infringe MobileStats’ patent and try to get away with it?

The Court has considered all factors and ruled that the patent is invalid. MINDEF did not infringe any patent as you can’t infringe a patent that was never valid in the first place. MobileStats had patented an idea that has existed since the 1970s (just Google the “mobile medical unit” concept, or see http://youtu.be/evcI-KcZw5E). Just as there are many smartphone designs and manufacturers who do not infringe each other’s patents, there are also many ways to design and produce military equipment like the BCS. MINDEF respects Intellectual Property laws and honours patents that are valid. When there are disputes over the validity of patents, parties can bring the matter to court. Just as you can file patents to prevent unauthorised copying of your inventions, so can others challenge your patents if they do not involve new ideas. Most importantly, MINDEF is just a buyer, not the manufacturer. If MobileStats believes it has a valid case, it should pursue the matter with the manufacturer, not the user.

The case was actually a commercial dispute between MobileStats Technologies and Syntech Engineers, which supplied the mobile BCS to MINDEF. As the manufacturer of the mobile BCS, the supplier, not the consumer, is responsible for honouring valid patents. MINDEF’s actions were correct and above board. All of MINDEF’s suppliers are required to uphold Intellectual Property laws and obtain the necessary licenses so that MINDEF is free to use the products that we have paid for. MINDEF simply wants the freedom to deploy our mobile BCS for training and operations and has no interest in acquiring MobileStats’ alleged patents. It is unclear why the owners of MobileStats chose to take legal actions against the consumer, instead of the manufacturer. Imagine if Apple sued Samsung handphone users – instead of Samsung Electronics – for allegedly infringing Apple’s Intellectual Property rights.

#3 Is MINDEF out to destroy MobileStats with the prolonged court case and the demand for the payment of $580K?

This is false. MINDEF did not initiate the legal action. It was MobileStats who inexplicably chose to sue MINDEF instead of the manufacturer. In defending ourselves, MINDEF’s conduct was in full compliance with court regulations and never found lacking.

$580K was the amount that the court decided MobileStats should reimburse MINDEF for our legal fees. Not a single cent will be kept by MINDEF. The money will go to Syntech, the BCS vendor, who honoured their legal obligation to MINDEF and bore the cost of the legal proceedings.

When legal actions are initiated against government agencies like MINDEF, these agencies need to respond. Public resources and monies are expended needlessly if such lawsuits are without merit. As a government organisation, MINDEF has a duty to protect our public monies. We regard such lawsuits taken against MINDEF with the utmost seriousness.