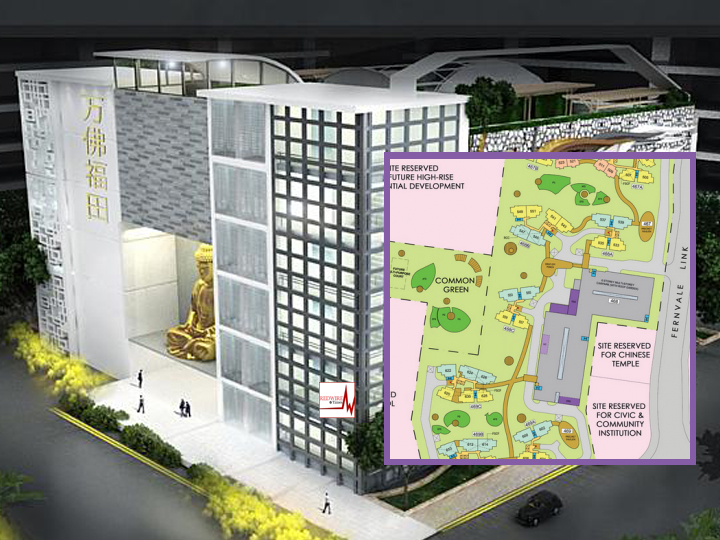 Eternal Pure Land (EPL) will not be building the hotly-disputed commercial columbarium at Fernvale Link in Sengkang.

This comes after the Ministry of National Development terminated its agreement with the company, which is owned by Australian company, Life Corp.

The MND announced today that it signed a Mutual Termination Agreement with EPL to void the July 2014 tender.

But as part of the termination deal, the government will release a small plot of land to EPL for a technology pilot project for columbarium services.

The MND says the site will be built on “land zoned for cemetery use and priced at market value based.”

EPL had been awarded a contract to build a temple and commercial columbarium at Fernvale.

But that move met fierce objection by Fernvale residents.

Those who had bought Build-to-Order flats in the area were furious that they were not informed of the development when they had signed up to purchase their flats.

They accused the HDB and URA of deliberately hiding information on the development from them.

Many also questioned why a commercial company was awarded the contract over a religious organisation, given that it was a temple being build.

Some 95 flat-buyers had requested for a full refund, but that was rejected by the HDB.

This is the MND’s statement on the EPL contract termination:

The July 2014 award of the Fernvale Link PW site to EPL was the first time a PW site had been awarded to a company that is not affiliated to a religious organisation. However, as the Government’s intent has always been for the Fernvale Link site (zoned as “PW”), to be awarded to a religious organisation or its affiliate for the development of a Chinese Temple, EPL’s 2014 bid was not in line with the Government’s plan for the site.

EPL understood that its bid was not congruous with the planning intent for a PW site, and has thus agreed to terminate the awarded contract by mutual consent. Under the Mutual Termination Agreement, the Government will refund EPL the full land premium and associated taxes and duties, which EPL has paid to Government for the site. This is only fair as the contract of the Fernvale Link site has been terminated. There is no other separate payment.

EPL originally intended to use the Fernvale Link site to test out its automated columbarium system and operating model, and remains keen to explore projects where it can meet the growing needs for columbarium and end-of-life services in Singapore. EPL has separately, through a related company, submitted a proposal for a pilot project, which URA has assessed to hold potential to enhance land use efficiency and minimise dis-amenity to surrounding users.

Given these merits and the need for such end-of-life services in our ageing society in the long run, the Government has decided to release a small plot of land to EPL for a technology pilot project for columbarium services. The site will be on land zoned for cemetery use and priced at market value based on columbarium use as determined by the Chief Valuer. The termination of the contract for the Fernvale Link site and the release of the small plot of land for the pilot project are part of the Mutual Termination Agreement.

The Government will re-tender the Fernvale Link site to restore the original planning intent of a Chinese Temple development.