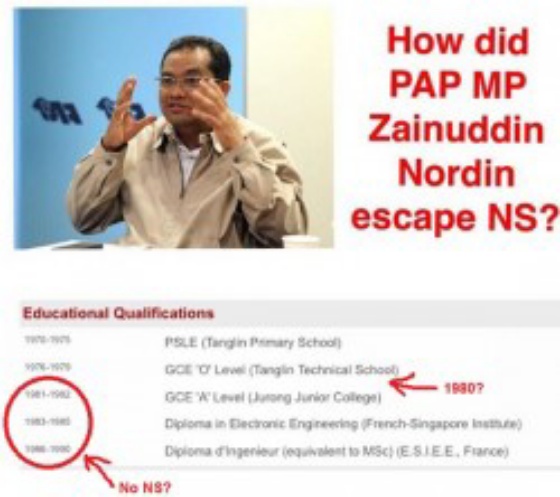 Take a look at his education record. Straight after “A” Levels in 1982, he went straight to do Diploma and Master of Science consecutively.

This was widely publicised last year but is worth sharing again to demonstrate what a vacuous person Zainudin Nordin is, given that as Chairman of the FAS, he has produced little, if not no, results.

So now back to the topic of NS, how did he escape serving the rite of passage for all Singapore males 18 years of age and above?

This story was published on The Alternative View.
Send us your stories at mail@redwiretimes.com

Zainudin also did not appear to serve any NS after he finished his MSc in France in 1990. He immediately went to work as a lecturer in FSI:

A reader has pointed out that Zainudin could have given NA a miss due to his race and the times. We’d like a confirmation from Zainudin on this.

“I think most Malay Males, his age group did not need to serve NS. I know of a few classmates of mine who never did NS at all when they turned 18 in 1979. I guess it was the policy at that time, a bit stupid as we did have many regulars who were Malays.“