A planned Return Our CPF protest this Saturday might no longer proceed because it has become impossible for speakers to register themselves for the event.

Blogger Leong Sze Hian had tried registering to speak at the protest on the NParks website yesterday afternoon but the website would not allow him to do so.

“After entering all the required information – and the reCAPTCHA text displayed – nothing happens (cannot continue)?” 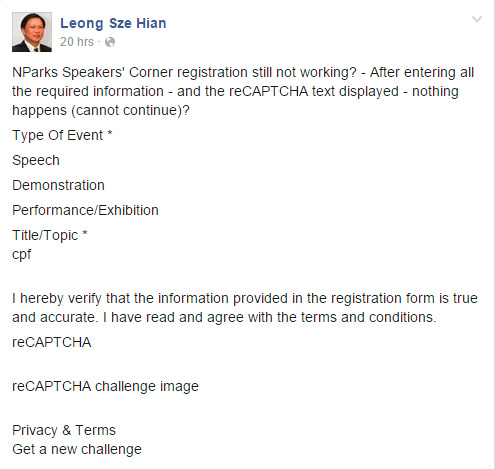 Mr Leong had spoken at the first four editions of the #ReturnOurCPF protest which was held monthly since June.

But after the fourth protest on September 27, they were  charged for public nuisance and holding a demonstration without a permit at the Hong Lim Park, after they were acccused of heckling mentally-handicapped children from a YMCA event which was also held at the park.

Organisers and speakers for planned protests are required to register their event on the NParks website.

The latest incident where Mr Leong is unable to register for to speak has led some in Singapore to speculations that NParks is pulling a stunt to prevent further protests from being held at the park.