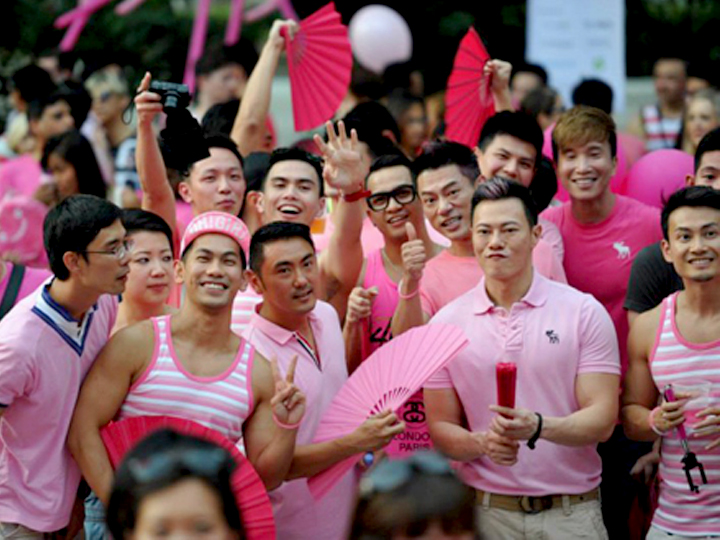 Organisers of Pink Dot 2017 have railed against the changes to the Public Order Act, such that only Singaporean Citizens and PRs will be allowed to attend the even this year.

Previously, the government laid down a ruling stating that only local firms can sponsor the LGBT event, which takes place annually on 1 July.

The new changes to the law ban foreigners from even turning up to observe the event.

All participants will need to show their identity cards to enter the grounds.

Those who are found to be participating illegally in the event can be fined up to S$3000.

“It is with profound regret for us, the organisers of Pink Dot 2017, to announce that as per recent changes to the Public Order Act rules on general assembly, only Singapore Citizens and Permanent Residents are permitted to assemble at the Speakers’ Corner.

As organisers, we were reminded by the Singapore Police Force that with these changes, the law no longer distinguishes between participants and observers, and regards anyone who turns up to the Speakers’ Corner in support of an event to be part of an assembly. In order to continue using Speakers’ Corner, Pink Dot 2017 organisers have no choice but to adhere to this regulation, as organisers and foreigners caught flouting this rule are liable to be prosecuted.

Pink Dot has been honoured by the strong support from friends from around the world who have unfailingly attended our events over the years, observing as their Singaporean friends make a stand for inclusion, diversity and the Freedom to Love. We acknowledge that this directly impacts and separates individuals with partners, friends and family who might not be Singapore Citizens or Permanent Residents and we are just as upset by this. Unfortunately, this was a decision that was taken out of our hands.

Just as we have seen local companies come forward to support Pink Dot in its time of need, so now we call on Singapore Citizens and Permanent Residents: on July 1, come to Speakers’ Corner, and let your voice be heard. Your pink ICs (blue for PRs) are now your passport to participate, and the symbol of our potential to make history, and set the course for a more truly inclusive future for Singapore.

Click here to read the amended rules of the Public Order Act: http://bit.ly/2qCWXTK”

You can further read the FAQ put up buy the organisers here:

Q: Last year, even though everyone was welcome at the event, only Singapore Citizens and Permanent Residents were allowed to hold up the placards. What’s different this year?

Q: Are the organisers joking? Surely it can’t be so serious that foreigners are not even allowed to step onto the park grounds yes? Speakers’ Corner is supposed to be about ‘free speech’ no?

A: We are not joking – this is a serious matter. Speakers’ Corner, as is with many areas in Singapore, is governed by a specific set of rules and regulations. With the amendments made to the rules of Speakers’ Corner last year, the measures taken by the organisers this year are meant to ensure that everyone remains on the right side of the law. Flouting of these laws will subject the organisers, as well as foreigners, to arrest and prosecution by the authorities – something we are sure everyone would want to avoid.

Q: So, what does this mean? How will organisers determine who is Singaporean/PR and who is not?

A: This year, we will have to ensure that anyone who is assembling at Hong Lim Park for Pink Dot 2017 is the owner of either a pink or blue identity card.

Q: What if I am transitioning/have transitioned and I do not look like the photo on my identity card?

A: Do not worry. Our staff on the ground will notify the organisers and a member of the team will be right with you to verify your identity and grant you access to the event.

Q: I am a foreigner and I come down every year to support the event. Where can I go?

A: Thank you for your support over the years and for still making the trip down to Singapore. This year, to ensure the safety of ALL our supporters we kindly request that everyone adheres to the park rules to stay within the laws of the land. We will be livestreaming the event proceedings over Facebook and there will be to-the-minute updates on our Instagram and Snapchat platforms. We invite everyone to support and celebrate the Freedom to Love even if you cannot be physically at the event.

Q: I am a foreigner. What if I still insist on turning up for the event at Speakers’ Corner with my foreign and local friends?

A: The consequence of failing to comply with the laws will result in yourself and/or the organisers being found “guilty of an offence and shall be liable on conviction to a fine not exceeding $10,000 or to imprisonment for a term not exceeding 6 months or to both.” This is something we do not wish on you, or any of the organisers of Pink Dot.