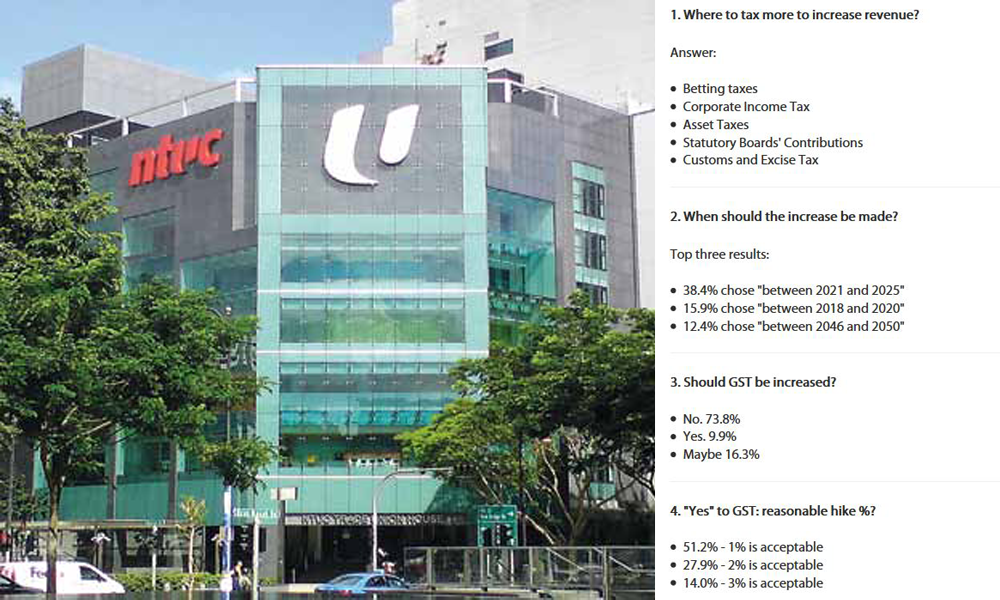 The National Trades Union Congress has confirmed that it conducted a poll between November and December last year to gather feedback from union leaders ahead of Budget 2018, which included questions on their attitudes towards a GST hike.

This comes after the survey and its results were leaked to online news agency The Online Citizen, leading to allegations that the government had indeed floated “test balloons” before deciding to raise GST only after 2020.

According to state media agency The Straits Times, NTUC said that the survey feedback was used to “inform the National Trades Union Congress workplan for this year and its labour MPs’ positions” and that the result of the survey “was not presented to the government.”

The said this on Wednesday (March 14) in response to queries from The Straits Times, after a selection of tax-related questions from the poll were posted on sociopolitical website The Online Citizen on Sunday (March 11).

Mr Steve Tan, the director of NTUC’s Ong Teng Cheong Labour Leadership Institute, said it had conducted an average of 10 feedback exercises each year since he started heading it in 2015.

Commenting on the GST hike questions included in the survey, he said:

“As the voice for working people, the labour movement needs to be on top of their concerns. As such, we regularly gather feedback, both formally and informally… Naturally, this would include the national Budget.”

Ministers had condemned opposition Worker’s party MP Sylvia Lim when she raised her suspicion regarding the government floating “test balloons” in parliament, and pressed her to apologise.

Ms Lim didn’t say the magic “sorry” word and pushed back instead, questioning whether double standards regarding the raising of issues in parliament were being practised.