More reports of sexual abuse faced by women at NUS freshmen orientation camps past and present have emerged.

But the trend is known to have been going on for at least a decade.

Accounts and anecdotes have been put up on NUSWhispers, recounting sexual abuse suffered during these camps.

One poster gave an account of being sexually abused during a seemingly-innocent act of kite-flying:

“I graduated from NUS last year, so my orientation was in 2011 (sounds really ancient). I was part of the pioneer batch in one of the UTown residential colleges. My Chief OGL was a total creep. His actions were sexually suggestive and made some of us feel uncomfortable. For example, he would grab our hands or shoulders during station games – when there was no need to do so in the first place.

Initially we thought that he was being protective and brotherly, but it turns out he had an ulterior motive. When I was trying to fly a kite in West Coast Park (we had a picnic on one of the last days), he tried to teach me a better method but he was groping my hands, arms, waist and shoulders. I tried to stop him by saying that I knew how to fly a kite, but he insisted I could learn from him. When I returned to my OG, my friends were like “Ooh, why are you 2 alone ah? Tsk-tsk!” – making it sound as if I had consented to being with him. Imagine if I had complained to the committee that I felt sexually harassed – there were no witnesses and in fact my OG might claim that we seemed to be a couple, so we might have some “couple problems”. It was a no-win situation for me.

When we were living in the RC, this Chief OGL also liked to intervene in the affairs of female freshies over module bidding or pretending that he cared about their well-being. In fact there was once he wanted to barge into one of the girls’ rooms so he could “help” her with her module assignment, which just so happened was the toughest in our programme.

Eventually, this OGL got into a relationship with a freshie girl, but it didn’t last long because he forced her into having oral sex. So my juniors, please do not mock or laugh at others when you say that “If you don’t like it, you can leave.” It’s not as simple as that, especially when you feel very emotional yet have to take into account many considerations, especially how you can still continue to survive socially after a particular incident.”

Another poster mentioned that he felt humiliated after he was forced to describe how he masturbated and reveal the size of his penis.

According to another poster, freshmen who were uncomfortable with the lewd sexualised games were simply brushed aside by camp group leaders when they raised their concerns. 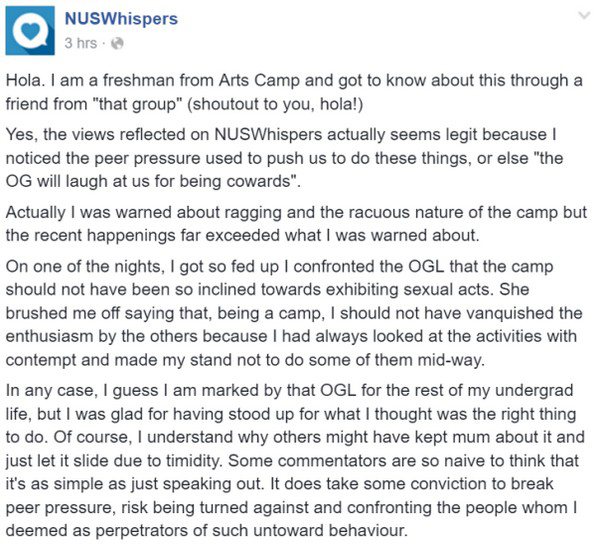 NUS has said that it will investigate the latest allegations of lewd games being played during this years’ camp.

This comes after complaints about the sexualised nature of freshmen games, not unlike complaints that have been raised in the past.

In one instance, one of the forfeits for a game required a male and female freshman to re-enact a rape scene between a young man and his younger sister.

“The girl had to lie on the floor, then the guy pretended to kick open a door and say, ‘Kor kor (big brother) coming.’ The girl had to respond, ‘Mei mei (little sister) don’t want’. He then kicked open her legs and did push-ups while lying on top of her.”

It’s unclear whether NUS will put a stop to such activities.