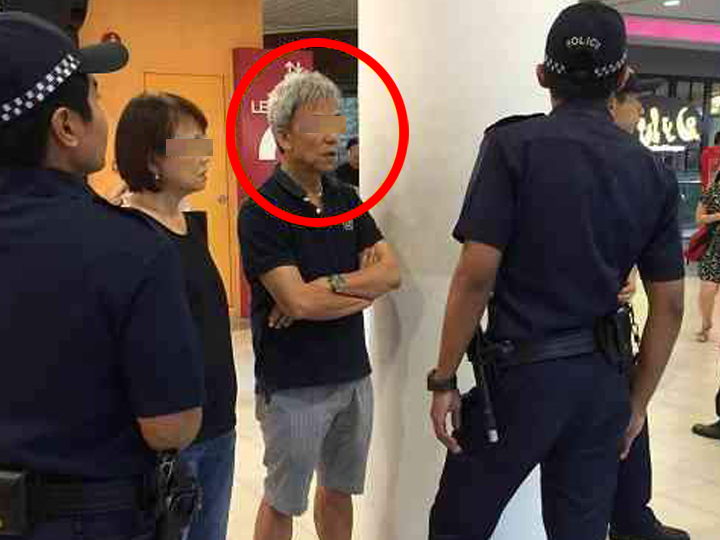 RACHEL: I was shopping with my 15-year-old daughter inside the shop name called Hako at AMK Hub. I realized there’s this medium build tanned looking guy with the whole hair white hair that was constantly standing beside me and my daughter. Initially I thought he was just looking at the accessories beside me so I never really noticed him that much. Then after shopping for a while, I went to outside of the store and waited for my daughter as she went to make payment at the cashier.

Just few minutes after I came out, I saw my daughter shouting out to the white haired guy and asking why did he touch her breast. I was in a state of shock. My husband was with me and he heard about the commotion and straight away, he gave that man a punch in a fit of anger. The guy didn’t retaliate and kept claiming that he did not touched her.

I was very angry, I told him no point arguing now, there’s CCTV in the shop, so we shall wait to see the truth. I called the police immediately to report the case.  While waiting for the police, I asked my daughter what happen. She told me that the guy had bump into her twice in the store already. But the first 2 times only brush against her hand so she thought maybe it was accidentally. But the third time while she was near the cashier, the guy use his elbow and brush against her breast.

This is too much, obviously this is intentionally!!! Who in the hell would raise up his elbow and walk? Seriously! And three times in a row at the shop, mind you, we were in the shop for 10 to 15 minutes only. The passage way of the shop is about 1m apart, don’t tell me you need to squeeze your way out in a 1 metre path way? And when my daughter call out to him in the shop to stop him, he keep rushing out of the store and not responding to my daughter. My daughter grabbed his shirt to stoop him and he finally turned back. Still can have the cheek to act very innocent and act as if we accuses him.

I faster went into the shop and check with the shop assistant if we can retrieve the CCTV, she say no problem at all. I’m also very glad that the shop assistant was very helpful, she told me she will offer her assistance to the police in the event if they require any information. I really hope that if there’s any witness to come forward to assist to make sure the fellow will be deserve the rightful sentence from the judge. So that he does not harm any of the other girls anymore.

Send us your stories at mail@redwiretimes.com
Find us on Facebook! https://www.facebook.com/redwire.singapore