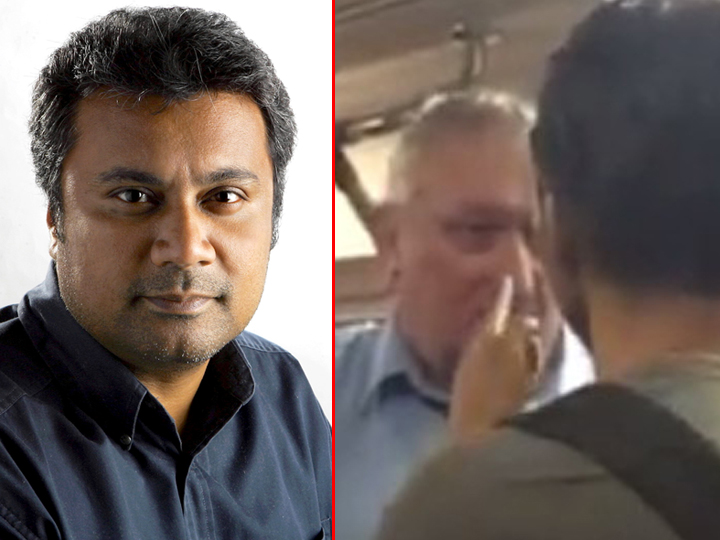 While embarking on a witch-hunt for the ang moh who verbally abused a teen on an MRT train, Singaporeans have turned on one of their own who criticised the teen for wearing a provocative shirt.

The New Paper editor Melvin Singh had written a commentary in which he condemned the actions of the angry ang moh, saying “his rude and aggressive behaviour cannot be condoned.”

At the same time, Mr Singh mentioned that the teen could have avoided sparking such a confrontation by not wearing a shirt that said “I’m F**king Special”.

Indeed, the angry ang moh could be heard in the video shouting “So you think you’re special…?” at the teen.

But following a story by website All Singapore Stuff, which The New Paper accuses of twisting the words of Mr Singh, Singaporeans have gone on the attack.

Many angry comments have been directed at Mr Singh, with many taking offence in the belief that he had sided with the angry ang moh.

They urged The New Paper to sack Mr Singh, and even attacked him for being a foreign instigator (Mr Singh is a third-generation Singaporean).

Clearly affected by the online onslaught, Mr Singh has hit back at his critics.

“Since your posting, my race has been ridiculed, my name and my family has been mocked. So bullying me is the response? To those who asked: I am Singaporean, third generation from a family with a proud history serving in the Armed Forces and Police Force. I too served in the Police Force for six years. I am a Rajput hence I do not have a turban. My full name is Melvinderpal. Check online and you will find it is a common name. I am colour blind and embrace all. I am in a mixed marriage if you must know. My mother is half Malay so I am of mixed parentage too.”

Still some have stood up for Mr Singh, saying that despite his slant, his comments do hold some water.

This is Melvin Singh’s commentary, “Who’s the Real Offender” in full:

Are we practising double standards here when it comes to foreigners?

Are we quick to condemn them when they are out of line, but slow to check our own behaviour?

On July 7, a teenager boarded the train at Bishan station around 11pm with a T-shirt proudly proclaiming “I’m F****** Special”.

An older man, obviously offended by the T-shirt, loudly berated the youth, challenged him to a fight and threatened to throw him out of the train at Ang Mo Kio station.

Video footage of the incident has him saying: “Are you getting off? If not, I’m going to throw you off.”

Yes, his rude and aggressive behaviour cannot be condoned.

Yes, the man’s threat is an offence under the Act. But so could wearing a T-shirt with a vulgarity in public. Other people could find it offensive and insulting.

So why did most people jump at how the older man reacted and not at what the youth wore?

Is it because they perceive the bully, who is light-skinned and has blond hair, to be a foreigner?

In the video, some passengers could be heard telling him to go back to his country and some of the online criticism also focused on him being a foreigner.

I’m not taking credit away from Mr Muhammad Hanafie, 25, who chided the bully and told him to get off the train. Mr Hanafie, who is unemployed, later told reporters why he intervened.

“It just doesn’t make sense. The man kept scolding the victim about his T-shirt,” he said.

Mr Hanafie said that throughout the incident, the teen kept quiet and avoided eye contact with the aggressor so as to not provoke him further.

But if we are going to label Mr Hanafie a hero and the older man a bully, would the youth be an instigator?

If others are to stand up to bullies, it may be useful to remember that idiocy is also a local affliction.

In June, a commuter uploaded a picture of a South Indian worker who had made himself as small as possible on a train from Jurong East to Marina South Pier.

A minute earlier, an elderly man next to him had yelled vulgarities at the foreigner for brushing against his arm. The older man proudly proclaimed himself a Singaporean and continued shouting at the migrant worker who sat quietly throughout the tirade.

If you put on a T-shirt calling for a reaction, you should expect one – though that’s no excuse for the older man’s behaviour.

Perhaps an apt punishment would be to parade the two on a train wearing T-shirts saying “I’m with Stupid”.