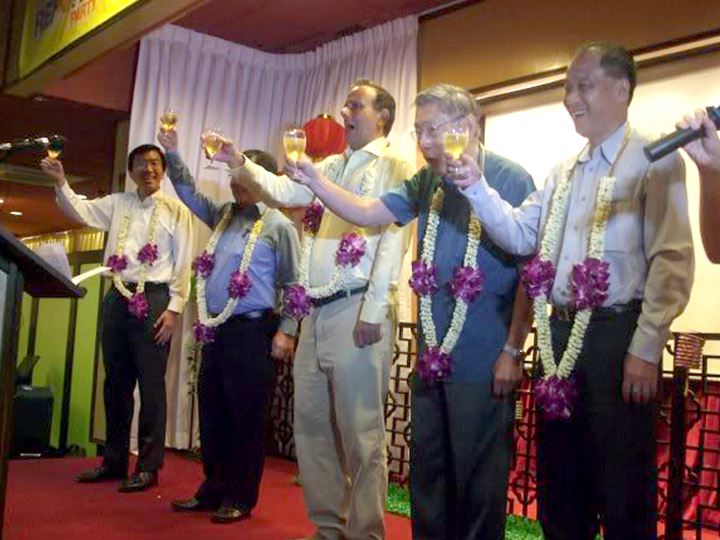 Instead of giving the ruling PAP a run for its money, multi-cornered fights might grant the party a walk in the park come the General Election widely believed to be held in September 2015.

“SingFirst’s principle is to avoid 3-cornered contest. 3-cornered fight is not beneficial for the opposition. We want a one-to-one challenge with the PAP.”

However, opposition supporters habour the worry that such fights are inevitable with the  growing number of opposition parties, and the first-past-the-post system where the party which gets the most vote in any constituency wins.

Many fear a repeat of the Presidential Election in 2011, where the PAP-endorsed Tony Tan won the presidency with 35.19 percent of the vote – just 7269 votes ahead of Tan Cheng Bock.

They believe that that the exodus of presidential candidates such as current SingFirst Secretary-General Tan Jee Say and former NTUC Income chief Tan Kin Lian led to a splitting of the vote between those who were against a Tony Tan presidency.

Redwire took to the streets to speak to some opposition fans on the issue of multi-cornered fights.

One Marine Parade resident we spoke to, who prefers to remain anonymous, said that the WP-NSP contest in Marine Parade has split his family down the middle.

“I voted for NSP in 2011 because I found Nicole (Seah) pretty cute lah compared to Goh (Chok Tong), but my wife who has now moved in with me has all along voted WP when she was staying in the Hougang area. And you know women how they like to nag, so she’s been asking me to vote WP if they come to Marine Parade. How, like that?”

As it stands, The Workers’ Party, arguably the most successful opposition party in recent times, has declared its intention to contest 28 seats come the General Election.

This might put it on a crash course with the National Solidarity Party in Marine Parade GRC and Macpherson SMC.

In Fengshan SMC, the WP could also be up against the PAP, and the Democractic Progressive Party.

The DPP has stated its intention to contest Bishan Toa-Payoh GRC and Potong Pasir SMC, which will put it in competition with the Singapore People’s Party.

Mr Chan, a Potong Pasir resident and SPP supporter, says the PAP might come out tops again in the SMC if there is a 3-cornered fight.

“You know, the last election, Sitoh (Yi Pin) won only by a small percent. Here, some of the residents know Mr Pwee (the DPP’s Benjamin Pwee) and if he comes back to Potong Pasir, there is the chance that they might prefer him over Mrs Chiam. But with the diffence so small, Mr Pwee might cost votes for the Chiams and the PAP will just take back Potong Pasir. I say to Mr Pwee, please leave us alone, you can go to Bishan if you want.”

The NSP appears have drawn the raw end of the stick.

Besides MacPherson and Marine Parade, it looks set for possible 3-cornered fights in Marsiling-Yew Tee GRC and Bukit Batok SMC (with the Singapore Democrats).

A 4-corner fight might even be on the cards in Tampines GRC for the NSP, with Singfirst also walking the ground, and Goh Meng Seng’s PPP casting a keen eye over the ward.

Online, netizens have called for greater solidarity amongst the opposition. 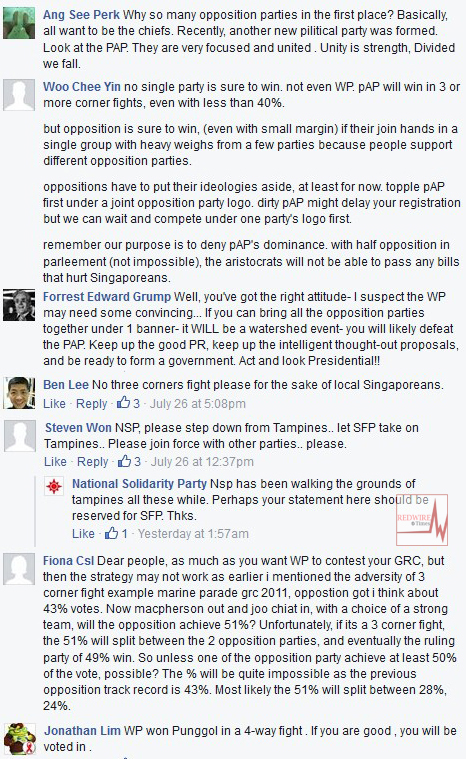 The NSP has called for a meeting on Friday (31 Jul) to address the issue of multi-cornered fights, which the Reform Party has slammed as a “backroom meeting behind closed doors”.