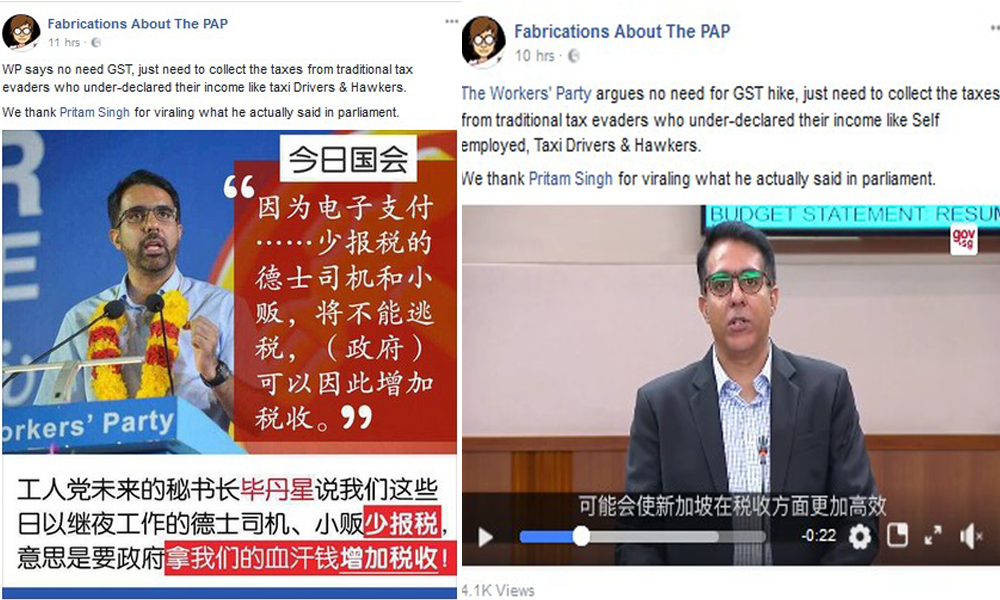 This time, FAP misrepresented what Singh said in parliament regarding the need to raise GST.

Singh had said that the government does not need to raise GST as it will be collecting additional revenue from new taxes such as the carbon tax.

“There was an inconsistency in the treatment of some additional taxes that will no doubt add to the Government’s coffers before that. For example, the Government was able to confirm that the imposition of the carbon tax would bring an additional $1b a year of revenue after implementation. However, no estimates were provided on the likely additional revenue that would be be added to the Government’s income with the inclusion of GST on imported services.”

“The journey to become a smart nation – another plank of this year’s budget – is likely to make Singapore more efficient in tax collection. There is also the question on the move to become a cashless society and the impact this will have on sectors which have traditionally been thought to under-declare their income such as the self-employed, hawkers and taxi drivers. This prospect will become less probable with the advent of more electronic transactions and in turn, is likely to have a positive impact on tax revenues.” 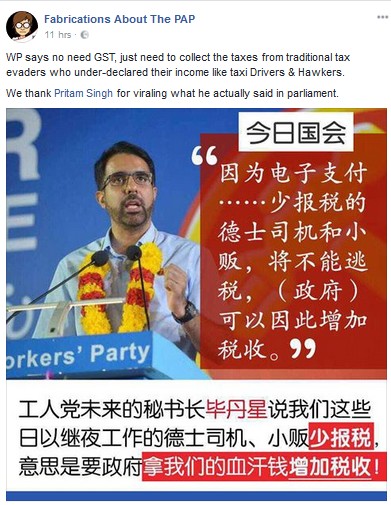 However, FAP spun Singh’s words into a misleading picture, together with the caption:

“WP says no need GST, just need to collect the taxes from traditional tax evaders who under-declared their income like taxi Drivers & Hawkers.”

The highlighted Mandarin text in the picture states:

“(Singh) means that he wants the government to increase tax revenue by taking our ‘blood and sweat’ money”.

Strangely enough, FAP also uploaded a video of Singh’s parliamentary speech on GST, likely indicating that administrators of the fanboy page knew what he had said and chose to mislead its followers regarding the content of the speech. 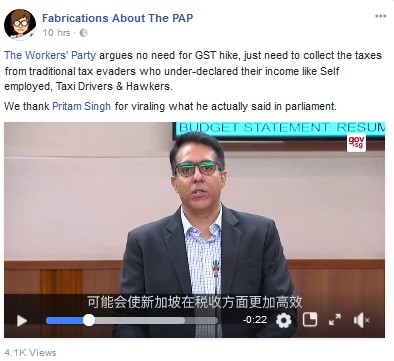 This isn’t the first time FAP has spread lies about Singh.

Just 3 months ago, it spread another set of fake news post about how a roller shutter had been left damaged for one year in Aljunied-Hougang Town Council.

The assertion that the shutter had been left unattended for at “least a year” and how calls to the town council went unheeded were shown to be a pack of lies.