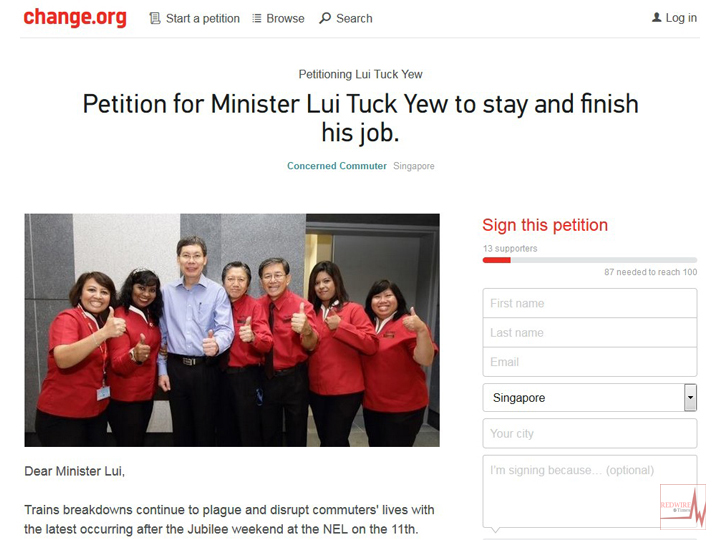 A petition has been started, calling for Transport Minister Lui Tuck Yew to cancel his retirement plans.

Mr Lui had announced two days ago (11 Aug) that he planned to leave politics and will not be contesting in the coming General Election.

The petition, titled “Petition for Minister Lui Tuck Yew to stay and finish his job”, was put up on Change.org by a netizen known as “concerned commuter”, who has called on Mr Lui to “save this beautiful country before it fall apart.”

The petition organiser is looking to gain 100 signatures in an attempt to sway Mr Lui.

“Resignation doesn’t solve the problem. Singaporeans need Minister Lui stay on to complete the mission, not for him to go down as the first quitter minister in our glorious 50 years history when the going get tough.”

So far, 13 people have signed the petition.

Several ministers have expressed their sadness at Mr Lui’s departure.

Social and Family Development Minister said Mr Lui was a mentor to him when he first entered politics, and slammed netizens who lambasted Mr Lui for Singapore’s transport woes:

“Things take time and Tuck Yew had been striving hard to deal with the transport issues. Things are improving and we will see the effect of his work to make things better for us all. Yet, he was constantly being mocked and vilified, especially by those online. Comes with the turf? Par for the course? Perhaps so. But we should ask ourselves if that is how it should be? I am sorry that he is stepping down. We will lose a dedicated leader who cared for Singaporeans and Singapore.”

“People like Tuck Yew don’t come along every day. Person of complete integrity and honesty – and spent his life serving the country. By the time he became a Minister, he was hugely experienced. And he brought that experience to his portfolio. Was subjected to daily incessant attacks but carried on doing his duty, calmly, and with equanimity. Could not have been easy for him and his family to be subjected to such incessant and frequently unfair attacks. Many in his position will naturally ask why should they subject themselves to this.”