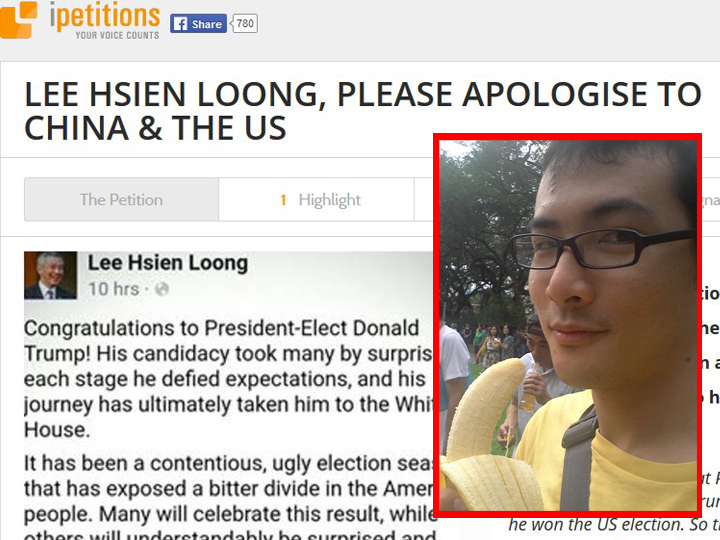 A petition that was started asking Prime Minister Lee Hsien Loong to apologise to China has increased in scope.

Now, petitioners are also demanding that our PM say sorry to the US too!

To date, 31 people have signed the petition.

“It also seems that PM Lee also offended Donald J. Trump after he won the US election. So those that say we are traitors or from the CCP, we just want to say that we are neutral and we think its important to have diplomatic leaders. He is saying that Trump won NOT thorough his own effort but because people in developed countries are deeply frustrated with the status quo. I shall leave this petition open till his inauguration so that we can demand his apology again to improve Singapore’s relations with the United States.”

Zhong was referring to PM Lee’s congratulatory note to the US President when he won the recent election. 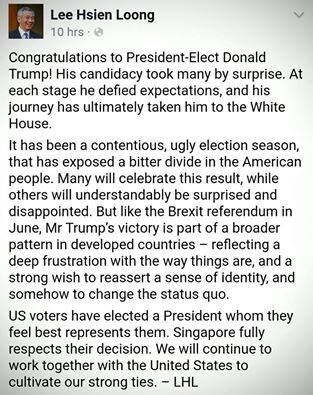 As for the initial petition for PM Lee to apologise to China, Zhong said:

“On the 25 November 2016, a shipment of 9 Singapore made Armored Personal Carriers (APCs) were seized by the Hong Kong customs and immigration for inspection. The Hong Kong customs then referred the matter to the China’s Ministry of Foreign Affairs.

There is widespread speculation this action was done in retaliation for Prime Minister (PM) Lee Hsien Loong’s antagonistic remarks to China during the South China Sea dispute between China and Philippines, in which Singapore is NOT a party. Lee Hsien Loong’s remarks that China respect the Hague’s ruling drew condemnation from China’s military and political leaders. Not being contended, PM Lee then taunted China once more during a Trans Pacific Partnership (TPP) meeting that China should not see itself as a “Middle Kingdom” in this region.

Since China and Hong Kong have not stated officially the reason for the detainment of Singapore’s military shipment, we cannot conclude a link at this time.

Regardless of our individual positions on the South China Sea dispute, we feel that our PM’s gaffe is a case of bad diplomacy because China did nothing to Singapore to warrant such a response. We categorically state that his remarks does not represent all Singaporeans. We feel that by making those remarks, he is acting against our interest and his actions puts in jeopardy our warm and stable relationship with China that former Prime Ministers, including the father of our current PM, the late Mr Lee Kuan Yew helped cultivate over the years. Its understandable for China’s leaders to feel annoyed. We would like PM Lee to apologise to China and help restore our peaceful relationship, while supporting Singapore’s call for the speedy and safe return of our property.

We are not anti-West, anti-China or against any country. We don’t have to agree with any country or do anything against our will. Equally, we don’t have to support and agree with everything China does either. Our neutrality on the world stage is an asset that makes us a friend to most countries.

So remember – we don’t have to agree with the provocative actions of our PM, but we are allowed freedom of opinion in Singapore to express this and still have loyalty to our country.”