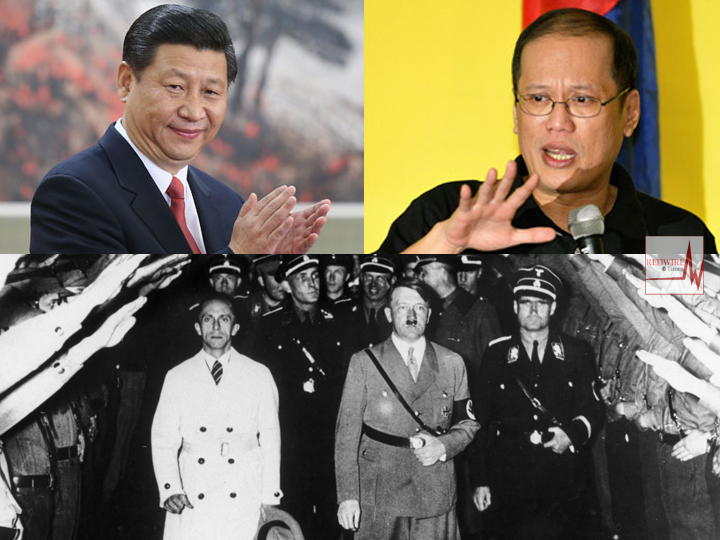 While Singaporeans are lamenting how Chinese immigrants are overrunning the country, the Philippines has gone one up and outright compared China to the Nazis.

Philippine President Benigno Aquino refused to pull his punches in Tokyo during a speech to business leaders yesterday (3 Jun).

He said that China’s actions in the South China Sea are similar to Nazi Germany’s demands for Czech territory in the 1930s.

What he was speaking about – the sovereignty dispute between China and the Philippines over waters in the South China Sea.

Aquino blasted the Chinese Communist Party’s ongoing claim to a majority of the potentially resource-rich waters.

“I’m an amateur student of history and I’m reminded of … how Germany was testing the waters and what the response was by various other European powers.

“If somebody said stop to [Adolf] Hitler at that point in time, or to Germany at that time, could we have avoided WWII?”

Aquino’s remarks echo similar sentiments made during an interview with the New York Times last year.

Then, he also made comparisons between Beijing’s maritime maneuvers now with Nazi Germany’s actions in the late 1930s.

For those not familiar with the Nazis, they’re the cruel and ruthless political group from Germany that persecuted and killed many people, took over lands by force, and led to the outbreak of WWII (which led to the damn Jap imperialists of the day bombing Singapore!)

China has expressed shock and outrage at Aquino’s statements.

State media outlets called Aquino an “amateurish politician who was ignorant both of history and reality.”