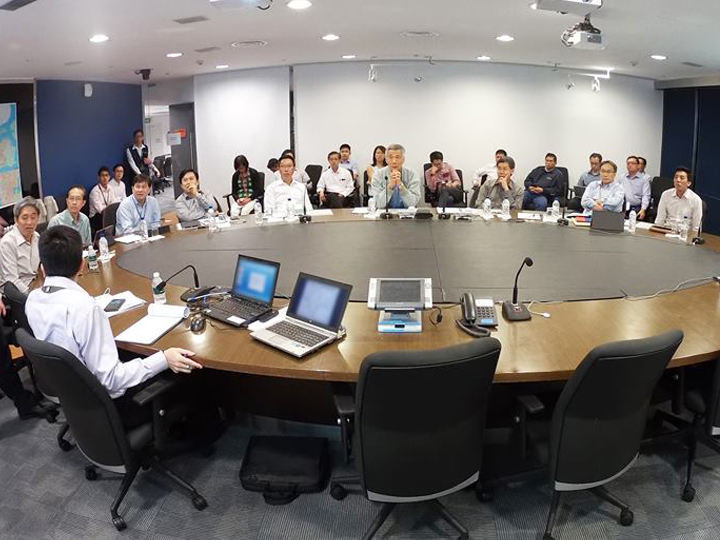 Singapore Prime Minister Lee Hsien Loong has expressed his concern at the latest SMRT train breakdown, which has been dubbed the worst-ever breakdown in history.

He says he has surveyed the SMRT’s maintenance operations, and there is worry that the problem might happen again.

“Am very concerned at the major disruption to train services last night. I had just recently visited the SMRT Bishan Depot, to see their maintenance operations and teams. So I went to the LTA Ops Centre this afternoon, to be briefed on the situation.

We are still trying to find out the cause of the problem. LTA and SMRT staff and engineers worked through the night checking trains, tracks and cables. Today fortunately trains ran without a glitch, so far. But because we have not identified the root cause of the power trips, we are still very worried that the problem may recur.

Hope we identify and resolve the faults quickly, to prevent further inconvenience to commuters. – LHL “

Meanwhile, NTUC Secretary-General Chan Chun Sing has sent his thank-yous to staff who worked overnight to get the train network’s two main lines up and running again.

“Thank you to all the workers who toiled overnight to get the MRT system up again. I know many are still working behind the scene to help manage the knock on effects of yesterday’s disruption. The engineers are determined to find out the root cause and fix it. Let’s give our workers and engineers our strongest support.

It is not easy for everyone. I can understand the disappointment and frustration that we all share. I also heard various encouraging stories of ordinary people chipping in to help those stranded and giving a pat on the back to encourage our frontline workers. If you have an encouraging story for our workers, do share with us. Thank you for your support of our workers and frontline staff.”

Transport Minister and Second Minister for Defence Lui Tuck Yew has apologised to commuters for the inconvenience.

“I am extremely concerned with today’s incident. This is the first time that services on both the North-South and East-West Lines were affected at the same time. I am sorry that so many commuters experienced massive disruptions to their journeys during the evening peak hours.

I am at LTA’s Operations Centre and they have briefed me about what happened and what could have caused it, but it is too early to conclude definitively. We need to get to the bottom of what caused tonight’s disruption. I have told SMRT and LTA to work through the night to fully recover train services and ensure that services run properly tomorrow.”

Meanwhile, Minister of State for Transport, Josephine Teo, who has previously advised Singaporeans not to “all board the train at the same time as it is difficult for the MRT system to cope” is nowhere to be found regarding this latest train breakdown, and has made no comments to the press.

It affected the North-South and East-West lines, halting traffic across 57 stations and disrupting the journey home for some 250,000 commuters.