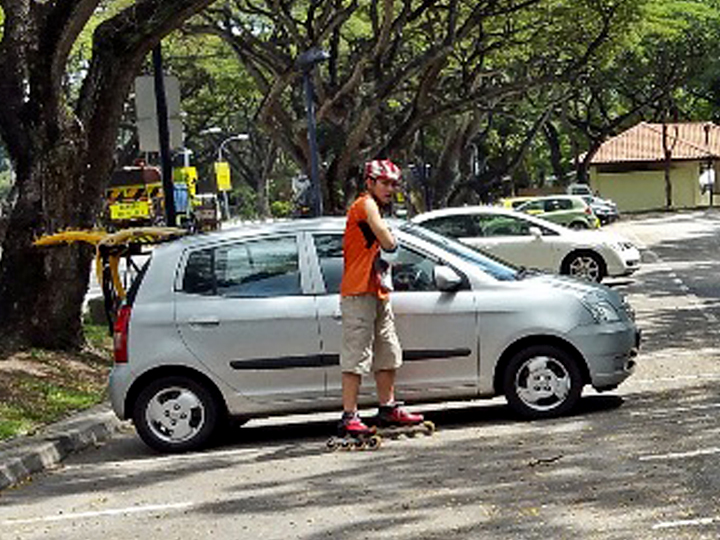 The parent of the supposed “ang moh carjacker” has written in saying that Colin Yap’s tale is complete hogwash. Kah Ying Choo says the boy is autistic, and his compulsive touching of door handles is a result of his autism. And, he isn’t a car thief wannabe.

“I am writing to you with regards to your post on Dec 7 about the “ang mo carjacker”. He is my son. My son is autistic. Autistic people have compulsive behaviours, and his thing is to go around cars to touch car door handles. So he is, by no means, trying to steal a car. He is wearing a very visible sign around his neck that explains that he is autistic. My contact number is on it. Anyone who has seen him for less than 1 minute will know that he has an intellectual disability.”

Choo was responding to story by netizen Colin Yap, who claims  claims to have witnessed an “ang moh youth” trying to open the car doors of cars at East Coast Park.

Yap slammed the police for their “lacklustre” response in attending to the incident.

He said he was at East Coast Park when he saw the ang moh “trying to open the doors of every parked vehicle at ECP carpark B1”.

Yap expressed his disappointment with the police, and urged them to have more urgency when handling such matters.

On 5 Dec 15 @ 1120 hrs, I encountered a Caucasian male in his 20s on roller blade going around trying to open the doors of every parked vehicle at ECP carpark B1. I called 999 at 1127 hrs and reported the incident and gave a description of the Caucasian suspect to the duty officer.

At 1141 hrs, I got a call (98271452) from the police officer who responded to my earlier 999 call. I gave him the description of the suspect and I even offered to send the photo of the suspect over to him. However, I was told by the officer that his mobile phone was unable to receive images?!

Nevertheless, I told the officer that I would keep a look out for the suspect and call him at the mobile number again if I see him.

At 1201 hrs, I saw the same suspect again at the same car park (B1) and I called the police officer mobile (98271452) a few times but was futile. I called the Bedok South and Marine Parade NPC and was told to call 999. I called 999 again at 1218 hrs and gave the information to the duty officer and my mobile number again. I waited and watched the suspect going around trying to open the car doors again but the police was no where in sight.

A Malay gentleman told me that the suspect had tried to open his car door and he shoveled him away and he also called 999 too but the police did not arrived.

It’s 1510 hrs now and I have not received any call from the police regarding this case. I am very disappointed with such lacklustre response from the SPF. In this heighten alert environment now, I think the SPF should response quickly and with a deeper sense of urgency.