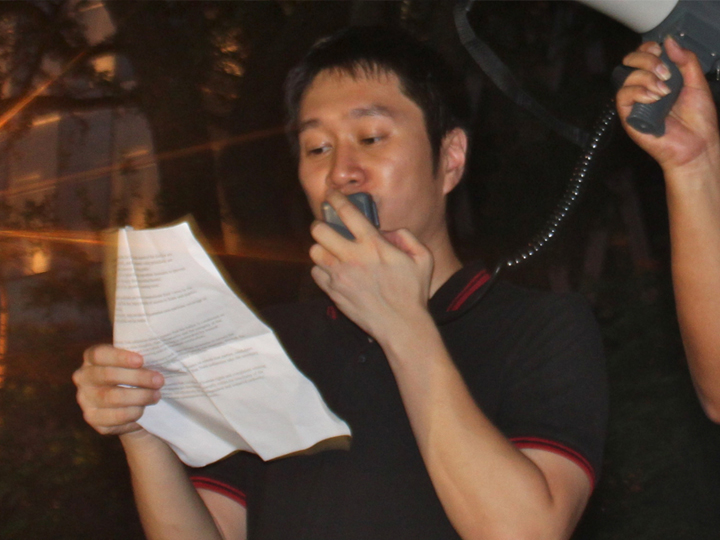 The Singapore Police mishandled a warning to human rights activist Jolovan Wham, and following that, he was made to pay S$6063 in legal fees in an attempt to quash it when there was no need to do so.

Mr Wham, the director of migrant worker NGO, HOME, received a warning from the police in October 2014 for a candlelight vigil he held at Hong Lim Park in support of student protestors in Hong Kong.

The police said there were foreigners amongst those who were at the vigil (foreigners aren’t allowed to participate in such events without a permit).

Mr Wham was verbally warned, and asked to sign a Notice of Warning, which he refused to sign,  saying he wanted a lawyer to scrutinise it first.

Instead of giving him a copy of the notice, the policeman at scene the notice.

Two months later, the police informed him via a letter that the warning had been served and the matter was closed.

Mr Wham was worried that this might be filed on record, and took his case to the court, asking for the warning to be quashed.

The case was dismissed because there is no need for a warning to be quashed as it had no legal effect.

But because of his appeal, Mr Wham was charged S$6063 in legal costs.

Justice Woo Bih Li has slammed the way the police handled the matter.

He said that the police should have handed over the notice of warning to Mr Wham instead of withholding it.

He also implied that the notice defied logic – saying Mr Wham was “hereby warned” at one point, and elsewhere creating the impression that he wasn’t warned yet.