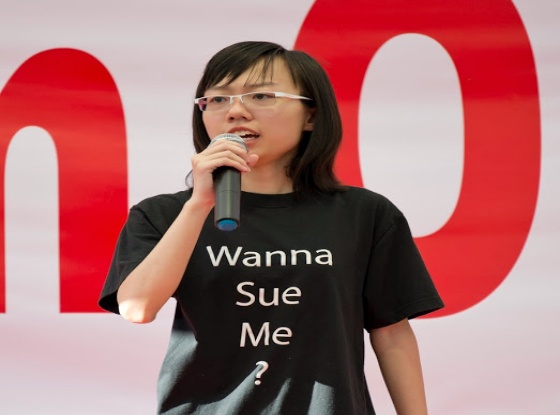 Can’t say she wasn’t asking for it.

Han Hui Hui has spent seven hours on Friday in Cantonment police station after having been questioned regarding her ‘illegal’ assembly when they spontaneously marched around Hong Lim Square on the 27th September without first having received a permit to do so. Han was initially prevented from contacting her lawyer M Ravi but was eventually allowed to call him. Nonetheless,  police have said to her that she has no rights for access to legal counsel during her interrogation and her lawyer is unable to visit her during this period of time. Is this justified?

Has Han been treated fairly by the authorities?

This information has been circulating on social media in the last few hours and the extremely immature response by many Singaporeans have left me very disappointed. Sigh. So much for your great education system, many Singaporeans don’t seem to understand how the basic premises of democracy works. Now allow me to issue a disclaimer here: I don’t like Han Hui Hui, that’s doesn’t mean that I dislike her, but I see her as a bit of a loose cannon – an immature, inexperienced young lady who doesn’t really have a game plan and her tactics are like a bull in a china shop. She lacks the charisma to be a popular figure and has no clue how to gain popular support for what she is trying to do. She is at best, a deeply controversial figure who alienates even people like me – and my readers know how I am vehemently anti-PAP. But even this stance doesn’t by default align me with her because she has yet to win my trust and respect. The same can be said about Roy Ngerng, another loose canon who keeps getting himself into trouble.

Regardless of whether Han Hui Hui is likable or not, she still deserves to be treated fairly by the law – that includes being allowed access to legal counsel when being questioned by police. Even if she is not officially arrested at this point and is only ‘assisting with the police’ in their investigations, she still deserves to be treated fairly by the authorities. How would you feel if one of your friends or relatives was detained by the police for hours, only to be told that s/he is not allowed to seek legal help? How would you feel if that happened to you? If it can happen to Han Hui Hui, it can easily happen to any one else in Singapore. Is this the kind of society you want to live in, is this the kind of government you want?
What does this case tell you about human rights in Singapore?

The fact is, you Singaporeans are at the mercy of the police who can detain you for up to 3 weeks and there is no legal requirement for you to be granted access to any legal counsel in the first 48 hours. Such is the law in Singapore – as individual citizens, you have two choices: either stay on the right side of the law or leave Singapore if you are not prepared to stay within the boundaries. Perhaps Han was a bit naive to think that she could gently push the boundaries and get away with it – I would be rather more cynical than her and would have recommended such tactics.

Another question raised is how harshly Han is being treated by the authorities – in sharp contrast to the recent case of Yang Yin, who has also been arrested but appears to have been treated in a somewhat more lenient manner.  Whilst Yang Yin has swindled an old lady and is clearly guilty, Han may be guilty of no more than getting confused over the paperwork regarding what is permitted for her event on the 27th September. Certainly, whilst Han may be misguided and a loose cannon, she is no threat to society, unlike Yang Yin. The reminds me of a classic play by Singaporean playwright Kuo Pao Kun “No parking on odd days” where the protagonist gets into trouble over a confusion over parking regulations and accidentally breaks the law. Han has made a mistake, sure, but she is by no means a dangerous criminal.
Is Han a menace to society? I don’t think so.

I do feel sorry for Han – the recent petition to strip her of her citizenship is nothing short of bullying and it speaks far more about the ignorant people who came up with that petition in the first place. You can’t just strip someone of his/her citizenship just because you don’t like her – by all means, if that person has broken the law, then arrest him/her and trial her. Singapore is meant to be a civilized society, governed by the rule of law – you can’t just kick someone out of the country the same way you unfriend someone on Facebook. This is like a bunch of immature kids running to the nearest teacher, screaming, “teacher teacher she broke the school rules, teacher expel her! Teacher kick her out of the school now!” No you silly kids, it doesn’t work like that, that’s not how things are dealt with in a civilized country. Certainly, even someone as vile as Yang Yin needs to be dealt with fairly and properly by the law.

As for the authorities detaining Han as if she is a dangerous criminal, please lah, she is harmless. Even if she participated in the next election, there is very little chance of her winning enough votes to secure her deposit. She is just too controversial for the vast majority of Singaporeans, even those who do not like the PAP and she is even deeply disliked by a portion of the population. Is she a threat to the PAP? Hardly, no. Someone like Nicole Seah is taken seriously as a possible opposition candidate who can win a seat the next elections – but Han Hui Hui? No chance. So why are the authorities getting their knickers in a twist over Han then, when she is not a credible threat to them?
Who are the dangerous criminals in our society?

My theory is that this is just poor management at the end of the day – the PAP is so intolerant of any kind of dissent that they will crush anyone, including Han, who tries to stand up to them. But any further intimidation of Han would be like using hand grenade to kill a mosquito  who is keeping you awake at night. Sure it would kill the mosquito, but you would end up blowing up half your bedroom and seriously injuring yourself in the process as the grenade goes off. No, this response is an overkill and will only damage the PAP’s reputation in the long run in light of the fact that Han is ultimately harmless and doesn’t have many supporters to speak of. I am surprised that the PAP are even taking Ngerng and her half-seriously, but that’s Singaporean politics for you.

As for Han and Ngerng (and anyone else who wishes to join their gang), sigh. Here’s a piece of advice: you can’t be a self-styled revolutionary if you don’t have enough supporters. Even when Nelson Mandela was in prison and Aung Sung Suu Kyi was under house arrest for many years, they both had very broad support throughout their country and they had done plenty to earn the respect of the people over the years. If you want respect, if you want followers for your political movement, then you have to earn it first. This is what made it so easy for Michael Bloomberg to take political office as the mayor of New York from 2002 to 2013 – New Yorkers can look at his business empire and instantly respect him enough to vote for him. Whether you like him or not, you can’t deny the fact that he has plenty of credibility.  Han needs to live her life, pursue some other endeavours to prove herself, build a successful career, earn the respect of her peers before considering politics. At just 22 years old, Han Hui Hui’s entry into politics is at least 20, 25 years premature.
Have you the credibility to be a leader?

You can say what you want about Han – just don’t treat her like a dangerous criminal and detain her like that, she doesn’t deserve to be treated like that. Even if she is somewhat of a loose canon at times, she deserves to be treated fairly by the law. As always, feel free to leave a comment below and let me know what you think – many thanks for reading.

This commentary was first published on Limpeh is a Foreign Talent.