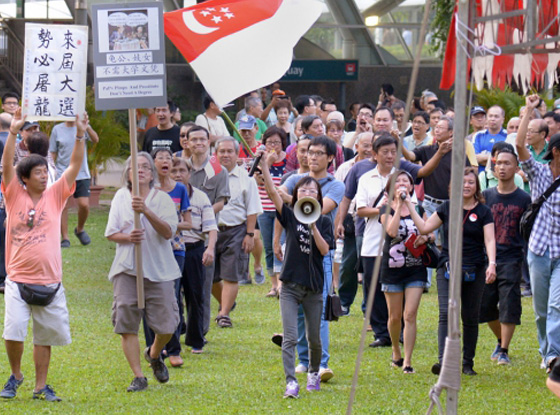 JOHN WONG: They were wilful and reckless, and now they’re paying the price.

Instead of being remembered for the one time when nearly 6000 Singaporeans banded together to demand that they be given more control over their CPF money, the Return our CPF protest will possibly go down in Singapore’s history as the saga where a bunch of unemployed thugs bullied mentally handicapped children.

All this, because of the political naivete of organiser Han Hui Hui and her partner-in-arms, Roy Ngerng.

Yes, they were victims throughout most of the protest, their voices drowned in a sea of music from the YMCA carnival. Whether the blaring music, played on repeat, was intentionally meant to disrupt the protest, we do not know. But it did, and many times, Roy Ngerng had to pause because he couldn’t be heard. And this wasn’t even part of the YMCA performance proper — it was a rehearsal, a rehearsal that went on for almost an hour before the actual event.

Still, Roy, Han and company shouldn’t have taken the march to heart of the YMCA fun-fair. Unfortunately, raw emotion ruled the day. Even if they didn’t have the intention of “heckling” the children, they would have been perceived to have done so. And the press would have a field with this story — wouldn’t “protestors heckle mentally-handicapped kids” make for a sensational headline that would draw more eyeballs? This is how we’ve seen it play out.

It’s time to grow up, protest leaders. Let cool heads prevail. Present the facts in a dignified way, just as the late firebrand J B Jeyeratnam would. That isn’t a sign of weakness — it’s show of graciousness, and one that can be plainly seen.

People will listen, as they have been listening. And the message will unveil the way it should.

This commentary was written by Redwire Times Singapore Editor John Wong.
Do you have a commentary to share? Send it to us at mail@redwiretimes.com