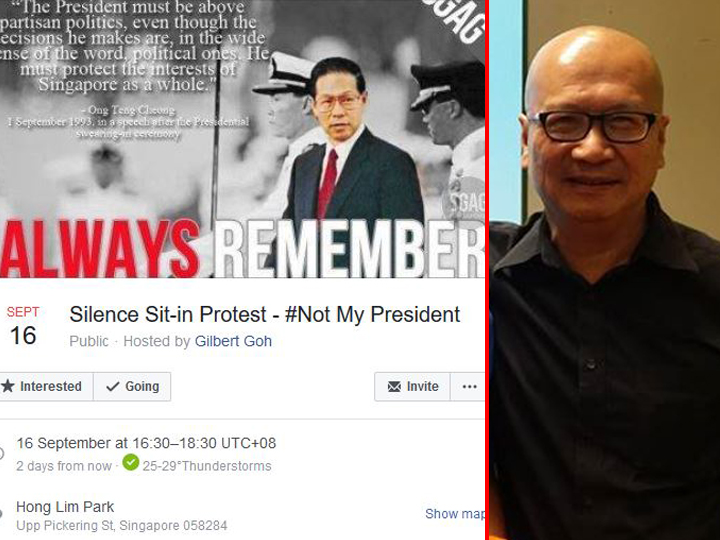 The protest against this year’s reserved presidential election will go ahead tomorrow after police approved a permit for the event.

Social-political activist Gilbert Goh, who organised the protest, urged dissatisfied Singaporeans to turn up and make a stand.

“Fear has crippled you all this while you are burnt up inside and its time to unlease that frustration by showing up with like-minded Singaporeans together as ONE voice.”

In a move that hugely unpopular move, the government changed the Constitution in November last year to allow only Malay candidates to contest in PE2017.

The negative reactions to President Halimah’s appointment has been overwhelming, to an extent which has not been seen in the past presidential elections.

Data intelligence firm Meltwater The Meltwater reported that on social media, there was a increase in negative sentiment surrounding the PE2017 amounted to 83 percent over the dates of 11 to 12 September 2017 following the results.

The #NOTMYPRESIDENT hashtag, which was reserved for US President Donald Trump, has gone viral in Singapore as netizens protest the appointment of Mdm Halimah – a PAP-endorsed candidate who served as a PAP MP and won after her competitors were barred from contesting.

This is the full press release from Goh:

“Our first-ever lady Muslim President Halimah will be inaugurated today and amid the pompous fanfare, Singaporeans feel a sense of betrayal that they have lost the chance to vote in the next head of state.

The loss of the democratic right to vote angers people personally even though they know that Halimah will probably win comfortably against the other two candidates. Voters now sense the probing encroachment of individual rights by the government and they react adversely online through the use of powerful social media.

It’s an election that is filled with all kinds of controversy chief of which is the true ethnic identity of the President-elect – is she a Indian or Malay? Is she being appointed or is the whole election fiasco merely a deceitful sham? Will all future Presidents be closely aligned to the government and if so why bother to have an election?

These are all important questions which bugged ordinary Singaporeans of which there are no ready answers from the government yet.

Things degenerated further before the epic climax and we now face a walk-over President who will have a lot to prove that she is no lame-duck like those before her.

Naturally, the poor President faces the furious leash of the whole systemic failure and it will take a while for things to cool off.

Yet many feel that the fault lies squarely on the Singaporean voters who have given a strong mandate to the government in 2015 to do what they like. With a 70%-voting population behind them, they ploughed on confidently knowing that the people are truly behind them now after a disastrous showing in 2011.

This also means that the government may not always want to consult the people first before acting – thinking that they have the backing of the people from the strong polls result.

The saving grace of the whole saga is the unifying factor it has generated – linking many dissatisfied Singaporeans up and we must thank the social media for that. People turn to their Facebook and other social media platform to voice out their frustration and over time the escalating discontentment morphed into an oasis of unity and togetherness.

There was an earlier event that we have planned two weeks back but due to the fact that we need to apply for a additional police permit because there is the issue of race involved we have decided to cancel that event altogether.

However, we have now organize another event on 16th Sep (Sat) and there won’t be any speeches but participants will gather for a silence sit-in as a sign of protest against the systemic failure of the Reserved PE. The NParks permit application was approved on 12 Sep.

Its also Singapore’s first mass sit-in protest without any prepared speeches and hopefully there will be a good size crowd to show to our government that we are unhappy with how things have gone for the Presidential Election.

There will also be a short press conference close to 630pm on-site and the organisers will be there to provide any press interview whenever necessary during the event.”

We have just received the NParks permit to stage a first-ever Silence Sit-in Protest against the Reserved Presidential Election this coming Saturday 16th Sep from 4.30 to 6.30pm.

Its a sit-in protest meaning that we won’t have any speakers for the event with no stage and no microphone speaker system. You can however bring along your placards to show your displeasure with the incoming government-appointed Presidency.

If you feel dissatisfied with the recent events surrounding the controversial PE, this is the time to show up and be counted. You can continue to be a keyboard warrior quietly firing away online but the time to step up is NOW!

Fear has crippled you all this while you are burnt up inside and its time to unlease that frustration by showing up with like-minded Singaporeans together as ONE voice.

People dropping by are encouraged to bring a mat and sit down silently on the park as a sign of protest against the PE. You can drop by anytime between 4.30 to 6.30pm or leave anytime of course. If you can join us for the sit-in silence protest for the whole 2 hours it will be great!

If you are bringing food and water along do be mindful not to litter the place.

Do wear black so we are united as ONE heart and people regardless of race and religion.

See you soon Singaporeans – Malays, Indians, Chinese and Eurasians are all welcomed!