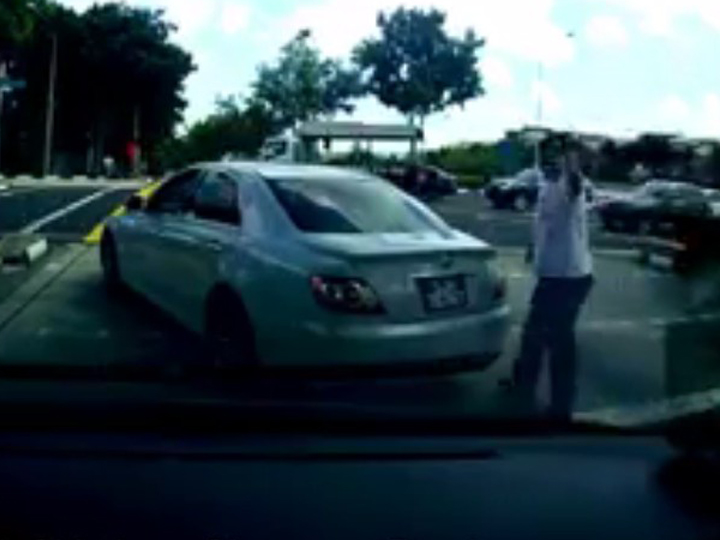 Driving in Singapore can certainly make you blood boil at times, but this chap got so mad over a supposed lane-cutting incident that he couldn’t see sense!

In this video, the driver constantly referred to as “daddy” was accused by another driver, Leo Tan, of cutting into his lane during a turn.

Leo sounded his horn at Daddy, who promptly horned back and gestured at him.

Then, the shenanigans began, with Leo abruptly cutting into Daddy’s lane, tailing him, and thereafter hurling Hokkien swear words his way.

“I was travelling along the exit of CTE at Ang Mo Kio Ave 3 towards Hougang when a car (SJH7676T) horned me. I sounded my horn slightly and gesture why did he horn. When I stopped at the traffiic junction, the driver wound down his window and started abusing me with vulgarities saying that I cut into his lane. I ignored him and proceed with the lights turned green. He then started to drive recklessly by cutting into my lane and brake purposely. My wife who was beside me who was afraid keep telling me ignore the driver which I had no intention of confronting as my young daughter is in my car.”

“When I reached the junction of Ang Mo Kio Ave 3 and Yio Chu Kang, I thought it was the end of the saga. But the driver followed me and stopped beside me continuing his abusive languages. I continued to ignore him. He then suddenly swerved his vehicle to stopped in front of my vehicle and came down to confront me. I wound down my window and asked him what he wants. He says that I cut into his lane and horn him and continued his verbal abuses.”

Daddy says he’s furious that Leo used vulgar words on his daughter, and says he has lodged a police report.

According to Leo, he was incensed that Daddy’s lane-cutting could have caused an accident, and to add insult to injury, Daddy also gestured at him when he was in the wrong.

“I am the driver of SJH7676T since the other driver reported this incident here. Well done this driver even attached the dvr recording. On that incident date, as seen in the video to me he cut into my lane without showing due care and I have to jam my brake and sound my horn at him to avoid any accident resulting him cutting into my lane which make my blood boil cause he show hand signal to me on why I horn him.”

Leo acknowledged that he was wrong to shout at Daddy, but he said his reaction was “natural”.

“There is a reason why people react this way if the people who cut into another people cut without showing due care and even show hand gestures what will u react?”