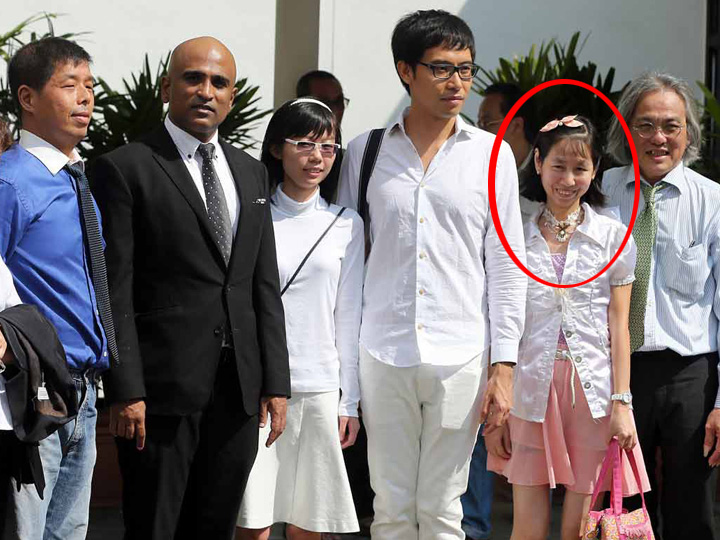 I’ve highlighted what a vile and disgusting person 1 of the 6 accused persons charged for public nuisance at the YMCA event was. – Ivan Koh. These persons who are good buddies with Roy Ngerng and Han Hui Hui, are all part of the Looney Fringe. Not to be outdone, I came across the antics of another of the co-accused – Ms Chua Siew Leng, 42, who uses the moniker – ‘Maniyo Kalyani’ on Facebook.
The Looney Fringe don’t believe in paying for their mad-cap antics, they expect the public to pay for it. As such they have been engaging in a desperate attempt to procure funds. And Ms Chua is obviously happy that it’s working as she laughs in delight that people have donated. 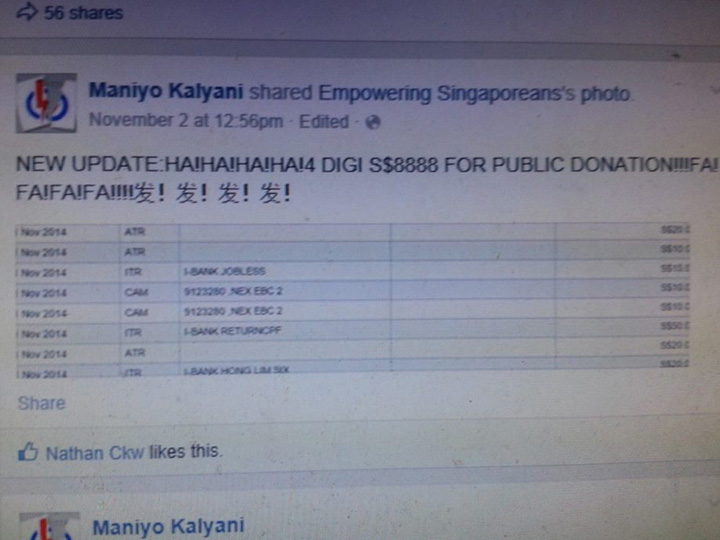 The message from this is clear – Ms Chua is so happy that people have donated and she might not have to.
However since reaching the figure of $8,888 shown in the above post, the donation drive has hit a severe bump. Only another $1,500 or thereabouts have been raised. It appears my article on it, has had some effect. It received almost 3,000 shares on FB alone and sources close to the Looney Fringe are blaming me for their lack of fund-raising. Well, I’ll take that as an honour that I’ve done my duty in a small way, to prevent the unsuspecting public from being hoodwinked.
Anyway back to Ms Chua aka Maniyo Kalyani. Any doubt that she isn’t a Looney Fringe can be swiftly dismissed. She’s been spamming FB pages writing in CAPS always requesting for donations. She even posted a video on her lawyer M Ravi’s FB page. I couldn’t resist the temptation to reply and remarked that I hoped they would fight the case all the way – not just in the State Courts, but launch a judicial review and constitutional challenge, plus appeal not just to the High Court but the Court of Appeal. In doing so, they’ll have to spend tens of thousands possibly more than $100k even.If they are busy spending their own money and being stressed, at least that’ll spare ordinary Singaporeans, especially under-privileged children and the elderly from their antics. In typical fashion she replied angrily in CAPS and then realised she was losing the argument and embarrassing herself. So she promptly deleted the post altogether!
They talk so much of freedom of speech or the lack thereof, but they themselves don’t want to let those that disagree or oppose their views, an avenue to respond. Even Roy Ngerng has blocked all forms of negative comments and opposing users from his FB page. Free speech indeed. Crazy Ms Chua went further – after deleting the post and my comments, she sent me a message on FB and then promptly blocked me! I laughed at her stupidity. Here’s what she wrote btw (again in CAPS):
SCREAM YOUR IDIOT HEAD!!!!ARE YOU SAW I AM SCREAMING?MY VOICE IS VERY SOFT ONLY..THERE ARE OTHERS SCREAMING MORE LOUELY THAN ME!!!SO DONT ANYHOW SAY I AM SCREAMING!!!!SHUT UP!!!!THESE IS OF COURSE FOR THEM TO APPEAL!!YOU THINK I DIDN’T KNOW IT!!!I ALSO KNOW SHOULD APPEAL BEFORE YOU TALKING NONSENCE HERE!!!!NO NEED USED SO MUCH MONEY AS YOU THINK!!!IT WILL NOT SPEND ALL MONEY!!!YOU THINK THEY DONT KNOW TO JUDGEMENT?THEY ARE ALL NO WRONG!!!!COS SPEAK OUT LOUELY TO LET MORE PEOPLE HEARD THEIR TALKING ONLY!!!OK!!!WHY DONT YOU THINK LIKE THESE!!!YOU ARE NOT SMART ENOUGH!!!OK?!!BUSY BODY YOU!!!Yeah right, tell the whole world that someone who spams FB pages and writes rubbish in CAPS, will not do any screaming and shouting in public, disrupting events and causing a nuisance! Very compelling argument, Ms Chua. I’m sure you’ve convinced the whole world, together with foul mouth Ivan Koh. Both of you are as innocent and noble like Mahatma Gandhi!

I hope that more people will open their eyes and see the Looney Fringe for what they are. How happy they are that people will donate to them, so that they can avoid forking out a single dollar when they behave abominably. Hopefully the donations trickle out and they finally have to pay the price for their outrageous behaviour.

This commentary was first published on AnyhowHantam.
Send us your commentaries at mail@redwiretimes.com